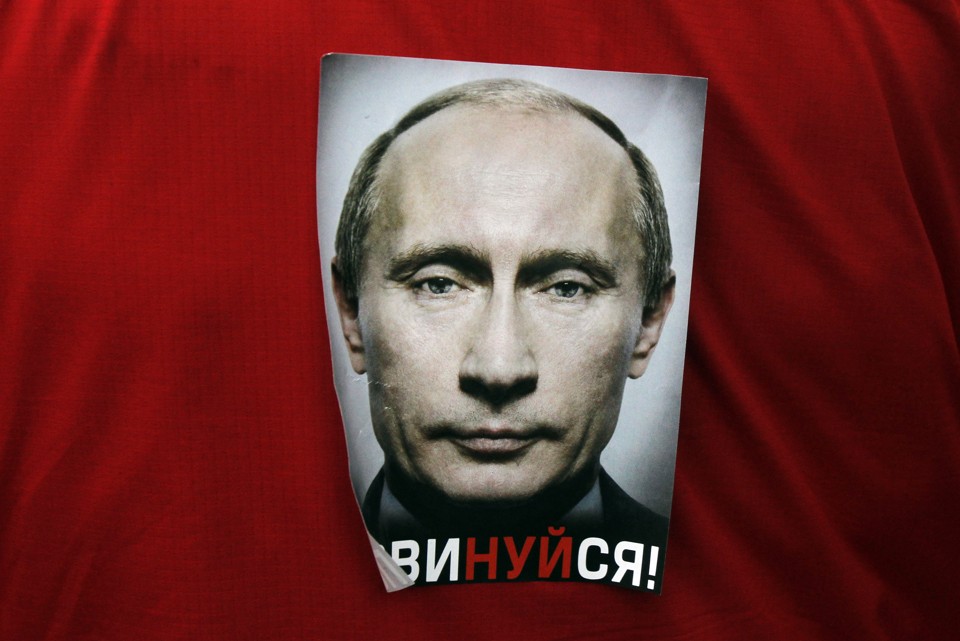 In a great story from The Atlantic, it appears that Hillary Clinton is actually running against Vladimir Putin instead of Donald Trump. Putin connections to Paul Manafort, who is the Trump campaign manager, have recently surfaced yet again showing that having Manafort as Trump campaign manager actually means that Putin is running Trump’s campaign. More from The Atlantic:

The Republican nominee for president, Donald J. Trump, has chosen this week to unmask himself as a de facto agent of Russian President Vladimir Putin, a KGB-trained dictator who seeks to rebuild the Soviet empire by undermining the free nations of Europe, marginalizing NATO, and ending America’s reign as the world’s sole superpower.

I am not suggesting that Donald Trump is employed by Putin—though his campaign manager, Paul Manafort,was for many years on the payroll of the Putin-backed former president of Ukraine, Viktor Yanukovych. I am arguing that Trump’s understanding of America’s role in the world aligns with Russia’s geostrategic interests; that his critique of American democracy is in accord with the Kremlin’s critique of American democracy; and that he shares numerous ideological and dispositional proclivities with Putin—for one thing, an obsession with the sort of “strength” often associated with dictators. Trump is making it clear that, as president, he would allow Russia to advance its hegemonic interests across Europe and the Middle East. His election would immediately trigger a wave of global instability—much worse than anything we are seeing today—because America’s allies understand that Trump would likely dismantle the post-World War II U.S.-created international order. Many of these countries, feeling abandoned, would likely pursue nuclear weapons programs on their own, leading to a nightmare of proliferation.

Trump’s sympathy for Putin has not been a secret. Trump said he would “get along very well” with Putin, and he has pleased Putin by expressing a comprehensive lack of interest in the future of Ukraine, the domination of which is a core Putinist principle. The Trump movement also agrees with Putin that U.S. democracy is fatally flawed. A Trump adviser, Carter Page, recently denounced—to a Moscow audience—America’s “often-hypocritical focus on democratization, inequality, corruption and regime change.” Earlier this week, Trump’s operativeswatered down the Republican Party’s national-security platform position on Ukraine, removing a promise to help the Ukrainians receive lethal aid in their battle to remain free of Russian control.

Now, in an interview with Maggie Haberman and David Sanger of The New York Times, Trump has gone much further, suggesting that he and Putin share a disdain for NATO. Fulfilling what might be Putin’s dearest wish, Trump, in this interview, openly questioned whether the U.S., under his leadership, would keep its commitments to the alliance. According to Haberman and Sanger, Trump “even called into question, whether, as president, he would automatically extend the security guarantees that give the 28 members of NATO the assurance that the full force of the United States military has their back.” Trump told the Times that, should Russia attack a NATO ally, he would first assess whether those nations “have fulfilled their obligations to us.” If they have, he said, he would then come to their defense.
Unlike Trump, leaders of countries like Estonia believe that the U.S. still represents the best hope for freedom.

These sorts of equivocating, mercenary statements—unprecedented in the history of Republican foreign policymaking—represent an invitation to Putin to intervene more destructively in non-NATO countries such as Ukraine and Moldova, and also represent an invitation to intervene directly in NATO countries—the Baltic states, first and foremost. This is why the Estonian president tweetedin a cold panic immediately after Trump’s interview appeared online: “Estonia is 1 of 5 NATO allies in Europe to meet its 2% def[ense] expenditures commitment.” The president, Toomas Hendrik Ilves, also noted that Estonia fought “with no caveats” with NATO in Afghanistan.

Unlike Trump, leaders of such countries as Estonia believe that the United States still represents the best hope for freedom. In his interview with Haberman and Sanger, Trump argued, in essence, that there is nothing exceptional about the U.S., and that therefore its leaders have no right to criticize the behavior of other countries: “When the world looks at how bad the United States is, and then we go and talk about civil liberties, I don’t think we’re a very good messenger.”

As someone who has covered President Obama’s foreign policy fairly extensively, I feel confident in stating that he has never expressed such a negative view of the U.S. We are truly in uncharted waters.

Republican Party foreign policy, to date, has been fairly clear on a number of subjects: The United States, Republican foreign-policy thinkers have argued, should help to expand the number of free countries in the world; they believe that the U.S. should come to the defense of free peoples whether or not those peoples can, or will, reimburse the United States for expenditures in pursuit of freedom; that Europe represents the stable platform from which the United States projects its power, and ideas, into the world; that Russian imperial dreams should be countered in a robust fashion by the U.S. and its allies; and that the withdrawal of the U.S. from three key regions of the world—East Asia, Europe, and the Middle East—would create vacuums soon filled by non-democratic regimes that would operate counter to U.S. national-security interests.

Donald Trump, should he be elected president, would bring an end to the postwar international order, and liberate dictators, first and foremost his ally Vladimir Putin, to advance their own interests. The moral arc of the universe is long, and, if Trump is elected, it will bend in the direction of despotism and darkness.