Last month, we offered a million dollar reward for information leading to the arrest and conviction of anyone who rigged a federal election on November 6th.  We urged computer experts to contact us with information about any election manipulation of the tabulation results.

We Received A Letter

On November 12th, we received a letter from “The Protectors,” apparently a group of white hat cyber sleuths, mentioning our reward and stating that two months ago, they began monitoring the “digital traffic of one Karl Rove, a disrespecter of the Rule of Law, knowing that he claimed to be Kingmaker while grifting vast wealth from barons who gladly handed him gold to anoint another King while looking the other way.”

“The Protectors” said that they had identified the digital structure of Rove’s operation and of ORCA, a Republican get out the vote software application.  After finding open “doors” in the systems, they created a “password protected firewall” called “The Great Oz,” and installed it on servers that Rove planned to use on election night to re-route and change election results “from three states.”

November 15, 2012- The non-partisan Citizens for Responsibility and Ethics in Washington (CREW) filed complaints Thursday with both the Federal Election Commission (FEC) and the Federal Bureau of Investigation (FBI) alleging that Karl Rove and his secretive Crossroads GPS violated election law and may have engaged in a criminal conspiracy to do so.

Coons' bill, titled the Louis L. Redding Fair, Accurate, Secure and Timely (FAST) Voting Act of 2012, is modeled on Obama's Race to the Top program for education. States that make voting faster and more accessible would be rewarded with federal grants.

November 12, 2012- Political watchdog and secularist groups are asking the U.S. government to investigate whether Catholic bishops and a Christian evangelical group headed by preacher Billy Graham should lose tax breaks for telling followers how to vote in this year's election.

Under constitutional protections of free speech and separation of church and state, churches are free to speak on any issue. But they risk losing tax breaks worth $145 billion in the past decade if they violate Internal Revenue Service rules by promoting or opposing any particular candidate. Other non-profits also have special tax status.

Citizens for Responsibility and Ethics in Washington, a political watchdog group, in its complaint to the U.S. Internal Revenue Service, cited reports of individual bishops "abusing their positions to advocate against the election of President Barack Obama."

November 12, 2012- On first hearing, voter ID laws sound like an obvious and innocent idea. After all, don't you need ID for everything else these days? So it's not surprising that 80 percent of Minnesotans polled last year said they favored a proposed state ballot measure that would have required voters to present a government-issued photo ID before voting.

But then progressive groups launched a massive education campaign, telling people what it would really mean. And despite starting 60 points behind in the polls, come Election Day they defeated the measure by a 54-to-46 margin.

Dan McGrath, executive director of TakeAction Minnesota, the citizens group that led the campaign against the measure, said his team didn't have the luxury of trying to persuade undecided voters or improve turnout. They had to change people's minds.

When new congressional districts were drawn last year, Republicans who control Ohio’s state legislature did their best to ensure their party’s edge in Congress for the next decade by packing the most possible Democratic voters into the fewest possible districts.

That’s how a swing state with a fairly even political divide will end up being represented in Congress next year by 12 Republicans and four Democrats. 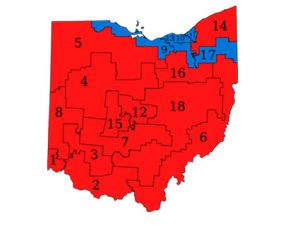 November 9, 2012- Ohio Secretary of State Jon Husted is fast becoming one of the most despised election officials in the country for his many attempts to restrict early voting and throw out legitimate provisional ballots. He’s also alienating federal judges left and right. After Husted issued a last-minute directive that could invalidate thousands of Ohioans’ votes, US District Judge Algenon Marbley did not bother to hide his impatience with the secretary’s hijinks.