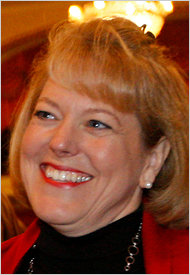 February 4, 2011- The wife of Justice Clarence Thomas, who has raised her political profile in the last year through her outspoken conservative activism, is rebranding herself as a lobbyist and self-appointed “ambassador to the Tea Party movement.”

Virginia Thomas, the justice’s wife, said on libertyinc.co, a Web site for her new political consulting business, that she saw herself as an advocate for “liberty-loving citizens” who favored limited government, free enterprise and other core conservative issues. She promised to use her “experience and connections” to help clients raise money and increase their political impact.

Ms. Thomas’s effort to take a more operational role on conservative issues could intensify questions about her husband’s ability to remain independent on issues like campaign finance and health care, legal ethicists said.

Justice Thomas “should not be sitting on a case or reviewing a statute that his wife has lobbied for,” said Monroe H. Freedman, a Hofstra Law School professor specializing in legal ethics. “If the judge’s impartiality might reasonably be questioned, that creates a perception problem.”

Ms. Thomas’s founding of her own political consulting shop, Liberty Consulting, was first reported Thursday by Politico, which said she had begun reaching out to freshmen Republicans in Congress.

The move comes a few months after she gave up the top spot at Liberty Central, a conservative Web site that she founded in 2009 and that has strong links to the Tea Party movement.