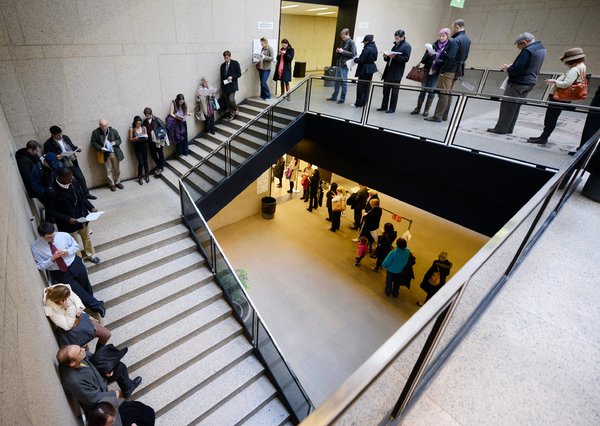 In his victory speech after his re-election in 2012, President Obama offered special thanks to those Americans who had stood in long lines to vote — some of whom were still waiting even as he spoke — and then offhandedly added, “by the way, we have to fix that.”

The line got big applause, but now, three years later, much of the country is still far from fixing one major cause of the long lines: outdated voting machines and technologies.

With the 2016 presidential election just a year away, the vast majority of states are still getting by with old machines that are increasingly likely to fail, crash or produce unreliable results. The software in them, mostly from the 1990s, doesn’t have the capabilities or security measures available today.

A study released last month by the Brennan Center for Justice found that nearly every state uses some machines that are no longer manufactured. And 43 states are using machines that will be at least 10 years old next year, close to the end of their useful lives. A member of the federal Election Assistance Commission told the report’s authors, “We’re getting by with Band-Aids.”

The central problem is a lack of money. The report estimates that it will cost at least $1 billion, and probably a good deal more, to upgrade voting systems nationwide. Election officials in 22 states say they need new machines but don’t know where the money will come from. Those states alone represent more than 120 million registered voters, and account for a majority — 324 — of the nation’s 538 electoral votes.

Congress could choose to authorize the funds for new machines, as it did in 2002, following passage of the Help America Vote Act, or HAVA, which was a response to the 2000 electoral debacle in Florida. In fact, as the report notes, that earlier infusion of cash is largely responsible for the current problems, since the upgrades it required introduced more complex technologies that demand more maintenance than older systems like punch-card ballots.

But any appropriation of that size is unlikely in today’s climate; to the contrary, the Election Assistance Commission — which was established by HAVA to serve as an elections clearinghouse, set national standards and certify voting systems — has been mired in Washington politics almost from the start. It finally got a quorum of commissioners last December, after a four-year delay, and still operates underregular threats by congressional Republicans to dissolve it. It gets by on a meager budget of $10 million a year, or about 5 cents per voter.

In the absence of reliable federal support, some counties are pointing the way forward. Election officials in Los Angeles County, for example, have rejected the clunky, proprietary machines used in most places and instead have designed their own system, in which voters make their selections on a tablet device, similar to an iPad, that then prints a paper ballot for voters to review and submit. Los Angeles has begun offering its model to other counties, most of which don’t have the money to replicate it.

The federal government should play a big role in making national elections run smoothly. Leaving it to the already strained budgets of state and local governments means that some voters will be disenfranchised simply because they live in an area that won’t or, more likely, can’t pay to bring its voting system fully into the 21st century.