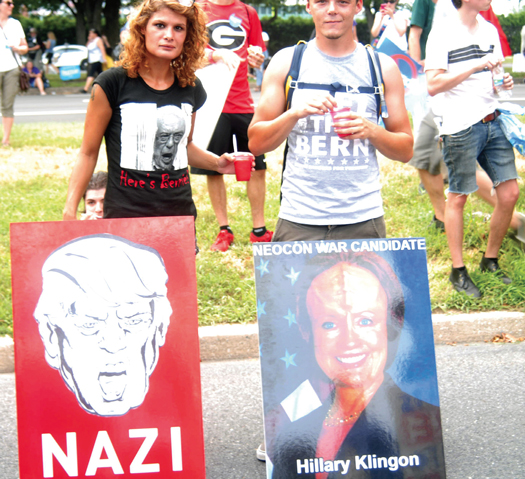 Hillary Clinton’s negatives are high, 68 percent of Americans do not consider her to be honest, while disdain for the GOP presidential hopeful is so deep much has been made of backing the former secretary of state, senator and first lady as the lesser of two evils.

Voting for Satan or Lucifer may be the mantra of political pundits and political operatives but it doesn’t inspire a devoted and active electorate.

But how much evil can America stand? Can she make progress if election after election the choice is between the candidate who will do the least harm and who is second worst when it comes to lack of character and trustworthiness?

“The ruling elite, along with the Black-misleadership class, have done all they can to create a dormancy and a dormant consciousness, and a sense of nihilism and apathy among the broad masses of suffering Black people, and to distract them, through images of, quote, ‘successful Black people,’ ” observed Dr. Anthony Monteiro, an adjunct political science instructor at the University of Pennsylvania, during the Democratic National Convention.

“Now tragedy has led to an awakening, but we can only go forward if we produce a new leadership, a leadership that is prepared to sacrifice and combine heart and mind towards a common purpose, the freedom of our people.

“I think out of this we will produce the next generation of James Baldwins, and Martin Luther Kings, and Assata Shakurs, and Angela Davises, and on and on, and on. That revolutionary leadership is in the making, as we speak. The tragic side will be combined with the positive side, of the emergence and formation of a new consciousness, and with that consciousness, a new revolutionary leadership,” predicted Dr. Monteiro.

Even the Republicans are trying to figure this out: Earlier in the year, Senate Majority Leader Mitch McConnell (R-Ky.) Said in an interview that a Clinton-Trump general election match-up “represents picking the lesser of two evils.”

The subject was part of a heated debate on Democracy Now during the DNC between Princeton professor Eddie Glaude and Georgetown University professor Michael Eric Dyson. Prof. Dyson agreed with Prof. Glaude’s assessment of Hillary Clinton as “the poster child of the corporate takeover of the Democratic Party,” but in a “choice between Donald Trump and Hillary Clinton,” he’s encouraging Blacks to vote for Mrs. Clinton.

Mr. Dyson’s argument was “a vote for Hillary Clinton preserves” the voice of the Black community. Others, including Bernie Sanders’ delegate, Linda Sarsour, the executive director of the Arab Association of New York, agreed Mrs. Clinton is the face of corporate greed and control. But they fear a Donald Trump administration will have far worse domestic consequences.

Khaled A. Beydoun, of the Barry University school of law, argues America’s eight million Muslims find themselves in a dilemma over “a candidate that frames much of his campaign on anti-Muslim animus and hysteria, and another whose political track record reveals a hardline approach to policing Muslims at home and punishing them abroad.”

Fear Mr. Trump will deliver on anti-Islam campaign rhetoric is pushing many Muslim Americans toward Mrs. Clinton, without taking into looking at her support of the Patriot Act, counter-radicalization programming in the Middle East and military interventions in Iraq, Libya and Syria, he said. These facts may portend even more dire consequences with Mrs. Clinton as commander in chief.

Underneath the “moderate Muslim” sup-port framed during the DNC “is a full-fledged commitment to expand localized anti-terror programs that link religiosity to radicalization, seed informants in community mosques and cultural centers, and enhance the surveillance of urban, Muslim-American enclaves across the country,” wrote Mr. Beydoun recently for Al Jazeera.

And while Mrs. Clinton has shown deference and offered a platform to the Mothers of the Movement, women who have lost children in high profile police shootings or killings in Black neighborhoods, it was young Black activists who confronted Mrs. Clinton and Mr. Sanders on the campaign trail who forced them to speak up on the issue of police abuses and fatal police encounters with Blacks. Many of these young people plan to stay in the streets and outside of the voting booth. They have little belief in change through the current candidates and system. “We speak of God with so much conviction but turn and be content with the lesser of two evils. Would God deal with evil at all?” asked hip hop artist David Banner on Twitter. “Absolutely not. I will not choose the lesser of two evils. I have no obligation to participate in an immoral outcome,” declared Black Republican Tara Setmayer, a CNN political commentator and party stalwart, with disdain for Mrs. Clinton and Mr. Trump.

“What agenda is on the table of the Republican Party or the Democratic Party that speaks for your interests? The old guard wants to maintain the status quo. But the new generation says, ‘to hell with the status quo, we ain’t with the establishment, Black Lives Matter. That’s wise,” said Ishmael Muhammad, national assistant to Min. Louis Farrakhan, speaking live July 31 at Mosque Maryam in Chicago. “Do you hear what you are saying? ‘We got to at least vote for the lesser of two evils.’ But do you hear what you are saying? You still voting for evil. So what’s the difference? The Devil is running and Satan—isn’t it the same evil? And the best we can tell our people is ‘ah we gonna have the devil so you might as well vote for him?’ ” he asked. “Hillary can’t win without the Black vote and Trump doesn’t care. That man energized the Republican base that brought out in the primary 14 million more than any other time in history. White folks feel their America has been taken from them. They’re right. But it certainly wasn’t us. … America is in deep trouble and so are we if we don’t get out of the way.”

Bernie Sanders’ lining up behind Mrs. Clinton left many walking away from him, and like scholar Cornel West, heading for the Green Party. The Bernie or Bust movement, DNC delegates who have refused to back Mrs. Clinton, held a press conference announcing they were going Green and supporting Jill Stein.

Two months ago, she said, the Green Party was totally invisible with no way of reaching the 15 percent support threshold that would put her on the national de- bate stage with candidates Clinton and Trump. “And then we’ve come up as high as 6-7 percent more recently,” said Ms. Stein.

Progress has been made without media coverage and with news of the campaign spreading by word of mouth, she said. It’s a matter of time before the numbers “can certainly double … and get the 15 percent,” insisted Ms. Stein.

Libertarian presidential candidate Gary Johnson is also gaining in recognition. Ms. Stein, who has debated Mr. Johnson, said she’d be willing to have another third party debate to help secure the 15 percent support.

Another alternative to voting for the lesser of two evils was broached by some Sanders’ supporters and mentioned by Professor Glaude. It is a swing state strategy that encourages voters to only vote for the Democratic nominee in a swing state, a state where two major parties have similar support, and vote third party otherwise. The 11 swing states are Colorado, Florida, Iowa, Michigan, Nevada, New Hampshire, North Carolina, Ohio, Pennsylvania, Virginia and Wisconsin.

“Progressives in this country have to begin to strike an independent movement beginning now, to bring the kind of pressure that’s needed,” said Bill Curry, former counselor in Bill Clinton’s White House. He told Real News Network, the Clintons of the world don’t see the “conflict between” being in bed with “big corporations and the wealthy” and their alleged “desire … for social justice and the amelioration of social problems.”

“Change is always a bottom up thing. It’s never a top down thing. Change always begins on the street. All of our successes of the 1960s … were the result of grassroots movements countering the powers that be and forcing the political environment to respond,” commented Vincent Hughes, a Pennsylvania state senator. He and his wife, actress Sheryl Lee Ralph-Hughes, sponsored a women’s Town Hall Meeting at the Democratic national convention.

This presidential campaign, as one pundit wrote, brought a heightened sense of awareness of the “lack of social justice,” a deafening cry for social justice and social media networks that resulted in a “political tsunami.”

With Hillary Clinton deemed “untrustworthy” by much of the electorate and having little good news in polling of 18-to-30-year-olds, a demographic Sen. Sanders did well with, not everyone is amenable to choosing the lesser of two evils.

Danny Glover, the actor, activist and a Sen. Sanders’ surrogate, was surprised when he heard Sen. Sanders had called for unanimous support for Sec. Clinton. “I was torn by the fact that he did it; he didn’t have to do it,” he said. “What are the forces that said he had to do this?”

Mr. Glover expressed disbelief that people are being taken in “under the guise of a progressive platform.” “The idea is that most of that is never acted upon,” he added. The Democratic Party platform was called the “most progressive” for the party because some of its planks included commitments to raise incomes and middle class economic security; creating good-paying jobs; bringing Americans together and removing barriers to opportunities; providing quality, affordable education and make debt-free college a reality and ensuring universal healthcare.

Echoing Mr. Glover was Vermont delegate Shyla Nelson, who joined Sanders at roll call, said, “There are many who are concerned about the degree to which the platform, as a symbolic gesture, actually would translate into commitments that are like funded mandates for actual policy changes.” So there is the possibility that the platform may make for big talk but little action.

Atlantic Magazine concluded, “It is unlikely that … platforms will return to the high profile position they once enjoyed. Primary rules, the modern media, and the importance attached to the nominee’s convention speech work against the platforms’ return to center-stage.”

What did take center stage was Mrs. Clinton’s red, white and blue bus ride through Ohio and Pennsylvania where she sought to allay the fears of White men, especially those without college degrees, who hardly support her. As she moves to the right to reach that disaffected group, will she lose core support and open the door for what many, Republicans and Democrats, call the Number One Evil: Donald Trump?