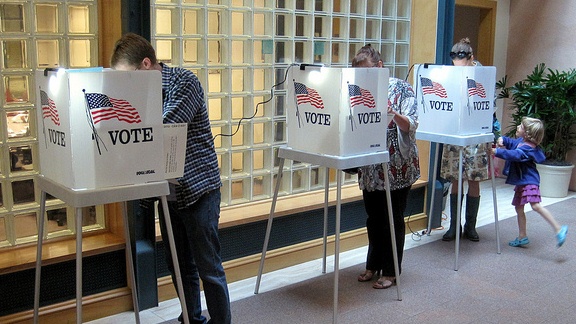 The 2016 primary elections were bedeviled by voting problems, according to a new report released Thursday by the Lawyers Committee for Civil Rights Under Law, which monitored polling places throughout the primary season. It adds to concerns that despite a string of recent rulings striking down voting restrictions, strict voting laws left in place, rule changes, administrative snafus and general confusion could keep large numbers of would-be voters from the polls this November.

Many of the problems were the result of changes to election rules that might have been stopped had the Supreme Court not weakened the Voting Rights Act in Shelby County v. Holder in 2013. Others reflect the disorganization and under-funding of the decentralized U.S. election system, in which states and local governments are chiefly responsible for running elections. A 2014 report by a bipartisan presidential commission cast a spotlight on election administration problems, calling for expanded early voting, online voter registration and updated electronic voting equipment, among other fixes.

Upson County, Georgia, consolidated election precincts before the state’s March 1 primary. One woman there told the report’s authors that poll workers were urging people waiting in line to leave and come back later to vote. The woman said she stayed and waited an hour and a quarter to vote but estimated that 30 to 40 would-be voters left. Before the Shelby decision, the county would have been required to get approval from the U.S. Justice Department before making the change.

The Justice Department recently announced that, thanks to Shelby, it will reduce the number of federal observers monitoring polling places to guard against voter intimidation and suppression in the November election. That move, says the Lawyers Committee report, “expands the burden placed on voters to look out for and speak up against vote suppression efforts that make it harder for people to access the ballot box in their communities.”

The report is just the latest to document the election changes that Shelby has allowed. “In 2016, it is entirely possible that the presidency, control of the Senate and a number of governorships could be determined by the voter discrimination made possible by Shelby,” a June study on the subject released by the Leadership Conference Education Fund found.

Federal courts have recently ruled against strict voting laws in North Carolina, Texas, Wisconsin and Ohio. But several of those rulings are being appealed, and whatever the result, the confusion from the ongoing court battles is likely to keep some voters from the polls. In addition, Virginia, Alabama, Mississippi, Georgia and other states have new restrictions that remain in place.

The Lawyers Committee report also urges voters to prepare ahead of Election Day by making sure their registration is up to date, arranging transportation and scheduling voting into the work day. And it calls on state and local election officials to provide improved training to poll workers and test their online systems.

“Double-check the details,” it adds. “The rules are constantly changing due to states’ actions and developing litigation.”