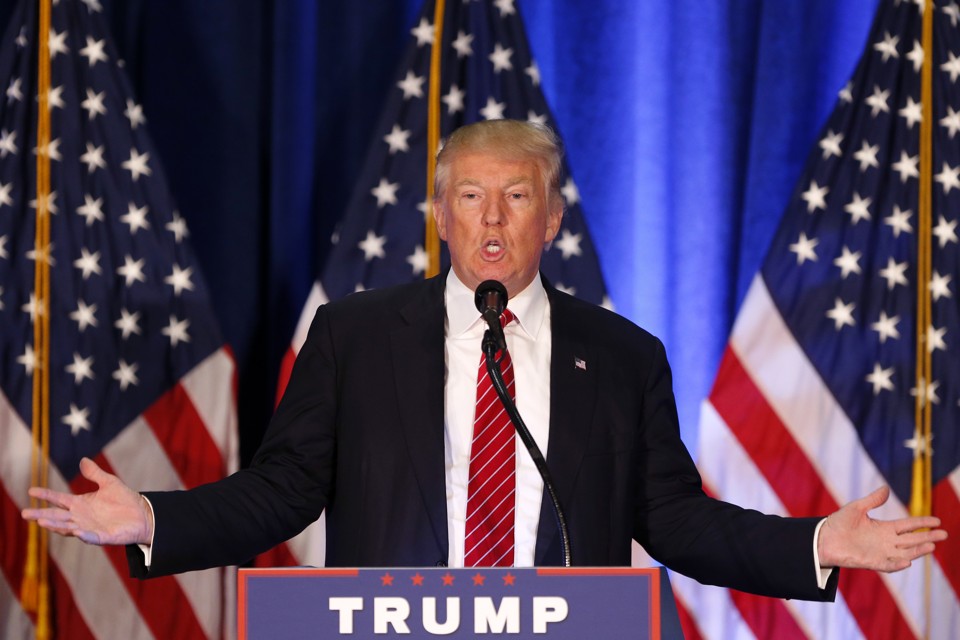 [lead]Donald Trump says the press cannot lie. But the Supreme Court says otherwise: In fact, many falsehoods are protected speech.[/lead]

“It is not ‘freedom of the press’ when newspapers and others are allowed to say and write whatever they want even if it is completely false!” Donald Trump tweeted on Sunday.

I will refrain from belaboring the contradictions in his concern for the danger of false statements in public life, because the question he raised is an important one.

The idea that lies are part of “freedom of speech” or “of the press” seems wrong. Lies—even lazy falsehoods—make finding the truth harder, erode mutual trust, and harm individuals and groups. Some can even lead to private violence or public disorder.

Why would free speech protect them?

Under U.S. law, many falsehoods—even some deliberate lies—receive the full protection of the First Amendment. That is true even though “there is no constitutional value in false statements of fact,” as Justice Lewis Powell Jr. wrote for the Supreme Court in 1974. Nonetheless, the Court has often refused to allow government to penalize speakers for mistakes, sloppy falsehoods, and lies. Political lies are strongly protected; but even private lies sometimes are as well.

Imagine if you will, the following impossible scenario: Candidate X says of Candidate Y, “His father was with Lee Harvey Oswald prior to Oswald’s being—you know—shot. … That was reported, and nobody talks about it.”

Shouldn’t this ridiculous, petty, cruel, and destructive lie be punished?

The answer, under First Amendment law, is probably not. The strictly imaginary comment above, however crude and stupid, is nonetheless a statement about an important political issue: determining the presidential nominee of a major party. So, if there is a “hierarchy” of speech under the First Amendment, this allegation starts out at the top. Candidates for president sling all sorts of mud at each other—one candidate, for example, may claim another is planning to “rig the election”; was involved in the “murder” of a government official even though an investigation had found suicide; or was theco-creator, with a sitting president, of a terrorist conspiracy against the United States.

Such allegations—not that anyone would make them—would be contemptible; but I would be worried about a system in which the government could silence them. A statute in Ohio, for example, set up a board to review campaign claims and made it a crime, punishable by up to six months in jail, for any person to make any false statement about a candidate or an election.

A federal court struck the law down in 2014—quite rightly. That’s not because there’s any “constitutional value” in false statements of fact but because the cure—government control of what can be said in politics—is far worse than the disease. To enforce this law, the tribunal would summon the speaker and demand proof that the false statement was not a deliberate lie. That process will inevitably suppress some true statements along with the false and frighten some meritorious speakers into silence; those suppressions are, over time, likely to be skewed toward speech that criticizes government.

Look at it differently. What is it like to be falsely accused of complicity in the Kennedy assassination? Surely it must lead people to shun the victim—and, in a nation full of heavily armed lunatics, may even put the smeared person’s life at risk. If government can’t punish this lie, could the victim sue for defamation (what used to be called “slander” or “libel”)?

At first glance, you’d think so. The law provides some protection for an individual’s reputation. Defamation, in law, is the transmission to others of false statements of fact that would cause others to shun the person defamed. Thus, falsely claiming that someone is a criminal, or an incompetent at his or her job, or afflicted with a contagious disease, or was once governor of New Jersey (kidding!) can usually give rise to a lawsuit and damages.

But even an individual lawsuit uses government power to suppress speech. Even ameritless lawsuit can impose costs on a truthful speaker. And the most important defamation case of the 20th century arose out of a systematic attempt to use defamation suits to suppress reporting on the civil-rights movement. Southern government officials began filing state-court defamation actions whenever national media reported on their doings with articles that contained any mistake of fact, whether innocent or not, important or not. In response, the Court, in a case called New York Times Co. v. Sullivan, created the modern First Amendment doctrine of defamation.

The United States wants the public to criticize government without fear.

First, it said, courts cannot assess defamation damages against those who speak about public officials unless the officials can show the false statement was made with “actual malice”—meaning “with knowledge that it was false or with reckless disregard of whether it was false or not.” In other words, people can say awful things about government officials—say, for example, that they are murderers, that they have brain damage, that they are corrupt, that they are planning to steal elections, or even that they have short, nasty little fingers—without penalty, as long as they have even an irrational belief that what they are saying is true. The Court later extended this rule to cover statements about “public figures,” too—people like, say, real-estate developers who star in reality shows and then run for president.

So such a figure would not be able to collect damages unless he could prove that a newspaper had deliberately lied or had printed a story while suspecting it was false. The reason, the Court said, was “a profound national commitment to the principle that debate on public issues should be uninhibited, robust, and wide-open, and that it may well include vehement, caustic, and sometimes unpleasantly sharp attacks on government and public officials.”

And the Court added that government itself, or public officials, can never collect for horrible things said about government in general—things like claiming government is deliberately lying about unemployment figures—because the United States wants the public to criticize government without fear.

And over and over, in cases involving “invasion of privacy” or “intentional infliction of emotional distress,” the Court has drawn that line: Public persons can’t collect without showing a false statement of fact made with “actual malice.” A genuinely private person, dragged from obscurity by a published lie, would be able to collect if he or she could show that the speaker was simply lazy or stupid. But even those cases are made harder if the speaker was talking about matters of “public concern.”

So imagine a story that says: “The effort to save Mr. Trump from himself has plainly failed. He has repeatedly signaled to his advisers and allies his willingness to change and adapt, but has grown only more volatile and prone to provocation since then, clashing with a Gold Star family, making comments that have been seen as inciting violence, and linking his political opponents to terrorism.” That story, especially when written after reporting, is protected—even if later it turns out that the reporter drew the wrong conclusion from his data. Why? It doesn’t “defame” any individual.

The First Amendment even protects false statements when made by private citizens, in private, when they don’t defame others. Thus, the federal Stolen Valor Act originally made it a crime for any individual to claim, for any reason, that he or she had received medals or decorations from the U.S. military. The government’s argument was that allowing these lies would reduce the prestige of the real medal winners and thus of the military generally. Writing for a four-justice plurality, Justice Anthony Kennedy wrote:

Permitting the government to decree this speech to be a criminal offense, whether shouted from the rooftops or made in a barely audible whisper, would endorse government authority to compile a list of subjects about which false statements are punishable. … Our constitutional tradition stands against the idea that we need Oceania’s Ministry of Truth.

Of course, the opinion reaffirmed, the government can prohibit lying in specific contexts—as a witness under oath in a deposition, to pick a random example, or in solicitations from private “universities” that promise their real-estate courses will help students become wealthy, to pick another. But general lying—for example, “I am worth $10 billion!”—is protected because, again, the cure is worse than the disease.

So, basically, the United States protects false statements because, unless needed leeway is given to people who are trying to speak the truth, government will begin to silence people for speech it does not agree with. And to prove that falsehood is protected, I will engage here in the most reckless and conscious lie I can think of:

Donald Trump is fit to be president.