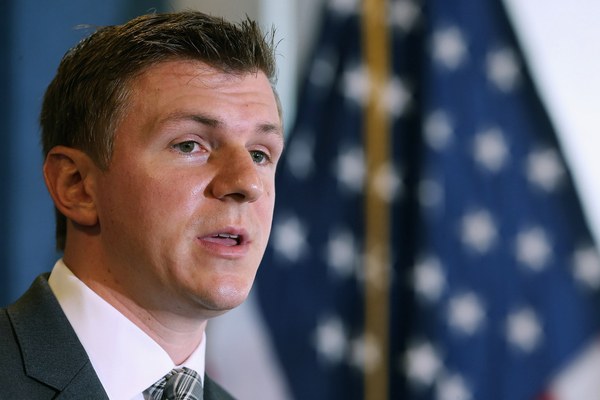 James O’Keefe III, the conservative activist famous for undercover stings, has dedicated his life to exposing the “misconduct” of others. But he’s developed a side business in accidentally exposing his own. In the latest chapter of his strange career, the League of Conservation Voters, a national environmental-advocacy group, has filed a complaint against three individuals who infiltrated its operations, at least two of whom, the group alleges, “could be associated with” O’Keefe and have past ties to him. The group’s leaders recently began to suspect that they were being scammed, and decided to go to the authorities before O’Keefe or his alleged associates released any material on their own.

In a six-page letter of complaint sent to the California Department of Justice on Friday, the League of Conservation Voters, or L.C.V., asked the state’s attorney general, Xavier Becerra, to open a criminal investigation into the operatives for potential fraud, racketeering, unfair business practices, trespassing, invasion of privacy, and possible violation of the state’s two-way-consent eavesdropping laws. The environmental group filed the letter in California because the “imposters,” as it labelled the operatives, first made contact with the organization through its state branch in the San Francisco Bay Area. A spokesperson for the California Department of Justice declined to comment, as is its policy on potential criminal investigations.

O’Keefe, whom I reached by phone on Tuesday, said that he was unaware of the letter and otherwise declined to discuss the matter. “I don’t comment on investigations real or imagined, or work with mainstream reporters who operate in bad faith,” he told me. In 2016, I wrote an article for this magazine about O’Keefe’s bungled attempt to sting George Soros’s Open Society Foundations, a liberal nonprofit group that O’Keefe had targeted.

L.C.V.’s letter describes an elaborate, six-month-long scheme. It alleges that the three operatives created false personas—backed up with fake Facebook, LinkedIn, and e-mail accounts—under which they met with “dozens” of the group’s staffers, board members, and donors, and gained access to “confidential” information. According to the letter, “at least two” of the individuals, who are identified as Christian Hartsock and Daniel Sandini, have worked with O’Keefe in the past, though L.C.V.’s letter acknowledges that the group doesn’t know whether O’Keefe was directly involved in the sting or merely inspired a copycat operation. Hartsock and Sandini also have connections to Stephen K. Bannon, President Trump’s chief political adviser: they both received film credits in “Occupy Unmasked,” a 2012 documentary directed by Bannon. The film’s cast notes describe Hartsock as a longtime collaborator of O’Keefe’s and a “protégé” of Andrew Breitbart, the late founder of the right-wing Web site Breitbart News, which Bannon ran prior to joining Trump’s Presidential campaign, last year. They also say that Sandini is “inspired by Andrew Breitbart and James O’Keefe.” The third individual named in the letter, Ann Vandersteel, is a conservative online commentator who has promoted conspiracy theories including “Pizzagate,” the election-season right-wing fantasy that claimed Hillary Clinton’s campaign was running a child-molestation ring in the basement of a Washington pizza parlor that, among other things, has no basement. (Hartsock declined to comment for this article, and attempts to reach Sandini and Vandersteel were unsuccessful.)

Carol Browner, the chair of L.C.V.’s board of directors and a former Environmental Protection Agency head and Obama Administration official, believes that L.C.V. was targeted because it is relatively mainstream and effective in advocating for action on climate change. In an interview, she described the operatives’ actions as “outrageous.” “It was quite sophisticated,” she said. “They work slowly. They do their research, so when you Google them, it looks O.K. They befriended people, learned about their families, and talked about donating big dollars. They took people out to dinners. They did this for months.”

According to the letter, the scheme began last December, when Hartsock approached L.C.V.’s Oakland, California, office pretending to be a man named Trent Maynard. He allegedly said that he represented a wealthy but politically inexperienced donor who had been motivated by Trump’s election to give to progressive causes. Hartsock presented a fake business card and mentioned that his donor friend wanted to be introduced to environmental leaders and elected officials. Soon after, L.C.V. staffers invited Hartsock to attend an Inauguration Day fund-raiser for environmental groups, where he mingled with various progressive leaders.

Two months later, in March, Hartsock introduced the California branch of L.C.V. to an associate, whom he identified as Dan Logan, of Logan Investments, but who L.C.V. now believes was Sandini.According to the Washington Post, Sandini was part of a 2016 sting by O’Keefe’s organization. A Web site for Logan Investments features jargon-laden material about its “distinctive approach” and “research-driven process and associated proprietary quant model.” The contact page offers an e-mail address for dan@loganinvestments.com, and a phone number in Portland, Oregon, that on Monday went unanswered. An associated Facebook page for Dan Logan displays pro-Bernie Sanders and Hillary Clinton photographs, and the hashtag #Resist. Among the books listed in Dan Logan’s “likes” is Saul D. Alinsky’s “Rules for Radicals,” which O’Keefe has said he read in college, and has since expropriated from left-wing activists as his own guide to waging guerilla warfare on liberals.

According to the letter, Sandini, in the guise of Logan, claimed that he, too, was representing the potential donor whom Hartsock had mentioned. He said that he knew other potential donors as well, and began to court the L.C.V. staff aggressively, taking them out for lunches and dinners and mentioning that his clients were interested in donating as much as four million dollars per year, for multiple years. As thank-yous, he sent people bottles of wine, and at one point he spent two thousand dollars on a ticket to an event called Green Latinos, which was organized by an allied environmental group.

The L.C.V. staff found some of Sandini’s behavior bizarre. At one L.C.V. event, he seemed inexplicably disappointed when he wasn’t able to present a pair of cufflinks to the California Senate’s president pro tempore, Kevin de León, after de León failed to show. The staff also noticed that he had a habit of leaving his cufflinks, and his phone, on tables during get-togethers, which, according to L.C.V.’s letter, “raises the possibility that we have been recorded without consent. We are deeply concerned that if surreptitious, unauthorized videos or recordings were made, these individuals could make deceptive edits to create unfair, malicious, and false impressions.”

By June, Sandini had attended several of L.C.V.’s top-donor gatherings in Washington, D.C., including one that counted several senators among the guests. Browner claims that Sandini made her immediately uncomfortable. “He stood too close, and he seemed to both know too much and too little,” she recalled. He was strangely knowledgeable about her husband’s career, and kept pushing Browner to respond to heavy-handed left-wing statements, while urging her to set up a voting drive in Florida. “He gave me the heebie-jeebies,” she said, a sentiment she shared with colleagues at the time. She was similarly uncomfortable, she said, when she met his friend Ann Steel, who attended a big-donor cocktail party for L.C.V. supporters. Browner nonetheless acquiesced to pose for a photograph with her. Tall, blond, and wearing a lacy white dress, Steel described herself as a wealthy oil baron’s widow. L.C.V.’s letter alleges that she is actually Ann Vandersteel.

L.C.V.’s staff began looking into the trio more closely last month, and soon noticed red flags. Their Facebook pages appeared to have been created quite recently, and featured an unusual number of “friends” from Southeast Asia—raising suspicions that these friends were purchased. A California L.C.V. staffer remembered that “Dan Logan” had mentioned his birthday, and checked that date against the address on a check he’d written. Sandini’s name popped up in connection with that address and date of birth. From there, it wasn’t hard to unravel the rest of the operation. Rather than confronting O’Keefe themselves, L.C.V.’s leaders decided to hire Tom Perrelli, a partner at the law firm Jenner & Block and a former associate attorney general in the Obama Justice Department, to file the letter with Becerra’s office.

Browner vowed to “fight this tooth and nail.” She said that L.C.V. didn’t know what the operatives were trying to get out of their investigation, and worried what they might do with the material they collected. “We have high standards, but it doesn’t mean they can’t slice and dice things,” she said. The letter notes that “O’Keefe and Project Veritas have a history of making deceptively edited videos to advance their political views.” In 2009, it notes, O’Keefe paid a hundred thousand dollars to settle a lawsuit stemming from one such video, and, in 2010, he was arrested in the offices of Senator Mary Landrieu, of Louisiana, and later pled guilty to entering federal property under false pretenses. O’Keefe claims he’s an investigative reporter, but last year, the letter notes, the chair of the ethics committee of the Society of Professional Journalists proclaimed that O’Keefe “is not an ethical journalist” and “has a history of distorting facts or context.”

While O’Keefe made his name, in 2009, by helping to bring down the liberal community-organizing group acorn, many of his stings since then have been risible duds, including the Open Society Foundations incident and his repeated effort to prove that widespread voter-identity fraud exists. On Tuesday, O’Keefe told me that this publication and others had failed to properly cover and appreciate the videos he released last summer showing Robert Creamer, a Democratic activist and the husband of the Democratic Congresswoman Jan Schakowsky, of Illinois, talking about disrupting Trump campaign rallies. After the release of the videos, Creamer stepped down from his role as a paid consultant to the Democratic National Committee.* “We broke the biggest story in the organization’s career,” O’Keefe said. As for using deceptive tactics, he said, “you say we use deceptive tactics, but the Chicago Sun-Times used deceptive tactics—undercover techniques—and won a Pulitzer for it.” In 1978, the Sun-Times was selected for, but never given, a Pulitzer Prize for a twenty-five-part series in which two reporters posed as bar owners to expose local corruption. According to Jack Fuller’s “News Values: Ideas for an Information Age,” the Pulitzer board decided not to award the prize after Ben Bradlee, the editor of the Washington Post, objected to the deception. After that, according to Fuller, such undercover investigations by news organizations “have gone out of fashion all together.” O’Keefe has tried to revive the practice. His results, however, have repeatedly shed more light on him than on his intended targets.

*Correction: This article originally misstated the organization that Robert Creamer stepped down from. It was the Democratic National Committee, not Democracy Partners.