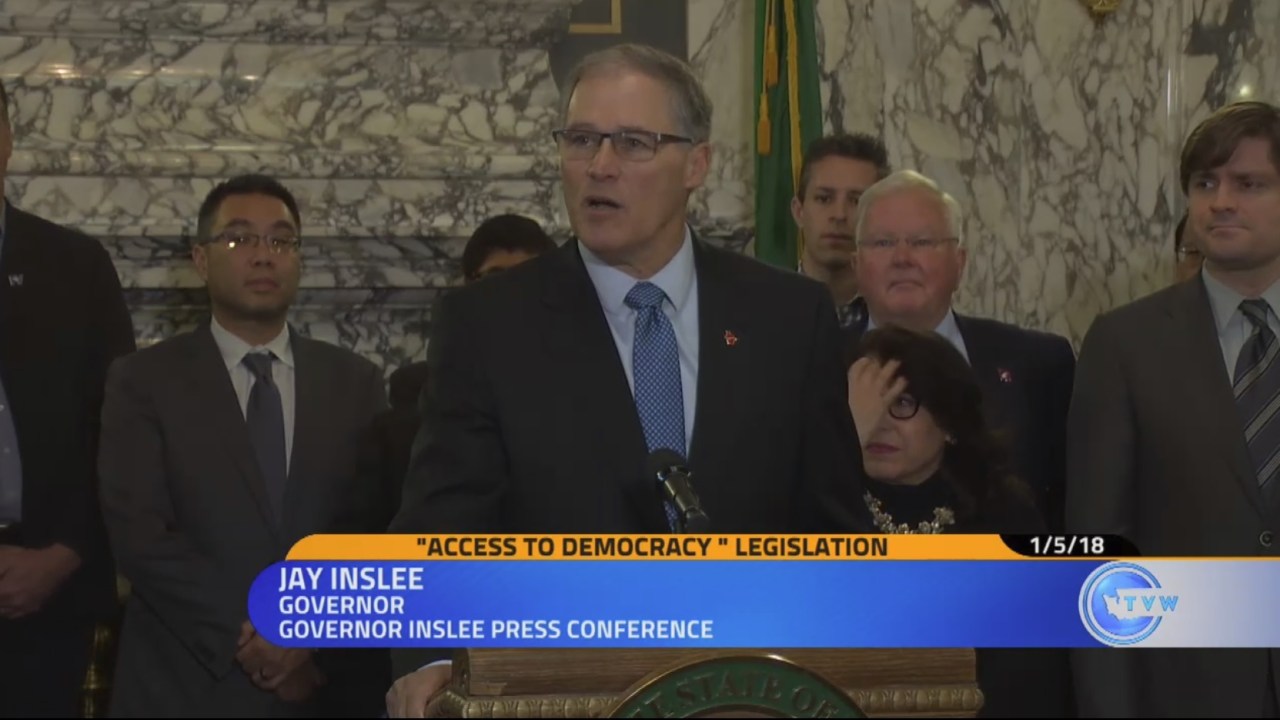 Last November, Democrats gained control of the Washington state senate — and, with it, the entire state legislature and the governor’s mansion — when Democratic Sen. Manka Dhingra defeated her Republican opponent in a special election. On Friday, Gov. Jay Inslee and a handful of his fellow Democrats announced the voting rights agenda they hope to push forward now that they control the state’s government.

Broadly speaking, their ideas include three proposals to prevent voter registration from being an obstacle to the franchise, additional disclosure rules for election donors, and legislation intended to reform municipal elections in the state to keep voters of color from being locked out of city government.

The Democrats’ proposals combine automatic voter registration and same-day registration, along with a provision allowing 16 and 17-year-olds to pre-register as a voter before they become eligible to vote on their 18th birthday. Automatic registration is a relatively new reform — the first automatic registration bill became law in Oregon in 2015, and it led to record participation in the 2016 election. Since then, a bipartisan mix of nine states plus the District of Columbia enacted similar laws.

Additionally, Washington Democrats are rallying behind a bill pushed by Sen. Rebecca Saldaña (D), which targets city elections that tend to exclude candidates of color.

In 2014, a federal court ordered the city of Yakima, Washington to abandon its system of electing all city council members on an at-large basis, and replace it with a system that divided the city up into multiple electoral districts. Although 41 percent of the city was Latino, Yakima had never elected a Latino candidate to the city council or the school board, because the city’s sizable Latino minority was outvoted. After the city moved to district-based elections, by contrast, it elected three Latina city council members in a single election.

Since then, at least two Washington cities have tried to follow suit, but were thwarted by a state law that makes it difficult to shift away from at-large elections.

The “Washington Voting Rights Act of 2018” would permit these cities to voluntarily change their electoral system, while also allowing private citizens to challenge local election systems that effectively exclude voters of color. This bill would encourage more municipalities to move either towards district-based elections, or towards variations on at-large elections that are less likely to disadvantage minority candidates.

The obscure Jim Crow tactic keeping Latinos out of politics

The Washington Democrats’ proposals to increase access to the franchise are, in many ways, the mirror image of legislation enacted by Republican-led states that appears designed to restrict voting rights. Voter ID laws, which target young voters, low-income individuals, and voters of color — all of whom tend to favor Democrats over Republicans — thrived in red states after the Supreme Court allowed Indiana’s voter ID law to take effect in 2008.

North Carolina, meanwhile, enacted an omnibus voter suppression law that matched voter ID with a number of restrictions on voting methods often used by African Americans. Though this law was struck down by a federal appeals court, the Supreme Court split 4-4 on whether to reinstate the law for the 2016 election. Had Neil Gorsuch, who occupies the seat Senate Republicans held open for a year until Donald Trump could fill it, been around to cast the ninth vote, North Carolina’s law would almost certainly have taken effect in 2016.

Voter suppression efforts like this North Carolina law are likely to continue in Republican-controlled states. And, with Gorsuch now ensconced on the Supreme Court, the judiciary is unlikely to provide a meaningful safeguard against many laws attacking the franchise.

The best solution to bad voting laws, in other words, is likely to be good voting laws which repeal tactics such as voter ID and press forward with provisions such as automatic registration.