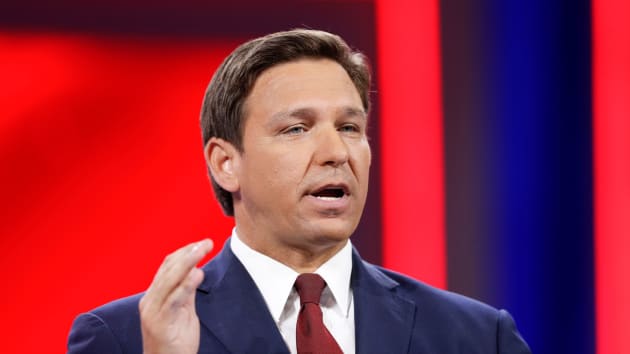 Florida Gov. Ron DeSantis is planning a private fundraiser in Utah later this month that is expected to draw some of the country’s wealthiest Republican donors as he signals a possible run for president in 2024.

DeSantis is set to head to Utah the week of July 18 for the private gathering, according to people familiar with the matter. Many asked not to be identified because the campaign is trying to keep the private event from getting too much public attention.

Though DeSantis is coming to Utah to raise money for his 2022 gubernatorial reelection campaign, fundraisers held in far-flung states like Utah, which is more than 2,000 miles from his home state, often suggest national aspirations.

The state is known to be a GOP stronghold; Utah voters have picked a Republican for president in each of the past six elections. Former President Donald Trump beat Joe Biden in the state by 20 percentage points in 2020.

Carson Jorgensen, chairman of the Utah Republican Party, said the state party isn’t co-hosting the event, but it will likely send someone to what’s expected to include breakfast and lunch with DeSantis. He noted the event is privately hosted and closed to the press.

“We just want to see more events done in the state supporting great candidates across the country,” Jorgensen said in a text message. He did not confirm a date of the gathering or who is going to be hosting DeSantis.

DeSantis hasn’t declared his candidacy for president, but he also hasn’t ruled it out. In a recent interview on Fox News, he didn’t nix the idea of running for president — even if it meant he had to first beat Trump in the Republican primary.

“Nice try, man” DeSantis coyly replied in an interview with Fox News last month, declining to answer when asked whether he would get into a primary fight with Trump in a run for the White House.

A person helping organize the fundraiser this month said many donors from across the country have been invited and will attend the gathering in Utah, but they are trying to keep Trump from taking notice. Invites have been sent verbally, instead of by email, to limit any paper trail, this person said. Donors have been told that the meetings with DeSantis in Utah is likely to start early in the day on July 19.

The other reason DeSantis is keeping the event under the radar, this person added, is to avoid looking like he is preparing to take on Trump in the 2024 Republican primary and provoking the former president’s ire.

An Emerson College poll conducted last month shows Trump as a clear favorite over any other possible contenders for the 2024 Republican nomination. The poll showed him with 55% of support from voters if he were to run for the Republican nomination, with DeSantis a distant second with 20%.

DeSantis has become a fan favorite of most GOP megadonors, with many of them helping him raise more than $100 million for his 2022 run for reelection in Florida and looking for alternatives to be their Republican nominee for president in 2024. Axios reported that an outside group is gathering over 1 million names of DeSantis supporters in case the Florida governor ends up running for president.

In a recent interview on Newsmax, Trump said he gets along with DeSantis and did not rule out having the Florida governor be his running mate if the former president ran again for the White House in 2024. Trump hasn’t ruled out running for president again after losing to Biden two years ago.

While Trump won Utah in 2020, DeSantis has allies in that state and previously traveled there as governor.

DeSantis spoke in Utah last year in front of the American Legislative Exchange Council. His remarks included mocking the Center for Disease Control and Prevention encouraging those vaccinated from Covid-19 to wear a mask in states where the coronavirus was spreading.