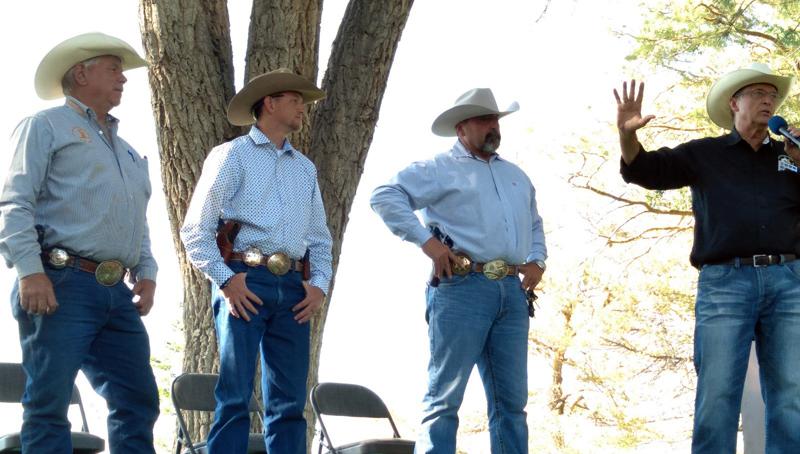 TOPEKA, Kan. (AP) — The sheriff in Kansas’ most populous county says he took it for granted that local elections ran smoothly — until former President Donald Trump lost there in 2020.

Now he’s assigned detectives to investigate what he claims is election fraud, even though there has been no evidence of any widespread fraud or manipulation of voting machines in 2020. Calvin Hayden in Johnson County, which covers suburban Kansas City, isn’t the only sheriff in the U.S. to try to carve out a bigger role for their office in investigating elections.

Promoters of baseless conspiracy theories that the last presidential election was stolen from Trump are pushing a dubious theory that county sheriffs can access voting machines and intervene in how elections are run — and also have virtually unchecked power in their counties.

Voting-rights advocates and election experts said any attempts by law enforcement to interfere in elections would be alarming and an extension of the threat posed by the continued circulation of Trump’s lies about the 2020 election.

“What we have seen time and again is that those who support the ‘Big Lie’ find conduits to groups of people who they think can help perpetuate this conspiracy theory and erode confidence in elections and potentially cast doubt on them going forward,” said David Levine, a former election official who is now a fellow with the Alliance for Securing Democracy, a nonpartisan institute with staff in Washington and Brussels whose mission involves combatting efforts to undermine democratic institutions.

To be sure, law enforcement can play an important role in elections by sharing intelligence, protecting election workers and equipment, and investigating potential election crimes. But that is typically done after election administrators request the help.

Hayden appeared at the “FreedomFest” in Las Vegas earlier this month, held by the Constitutional Sheriffs and Peace Officers Association, although his office said he is not a member of the group.

Onstage with him were sheriffs Dar Leaf of Barry County in southwest Michigan and Chris Schmaling of Racine County in Wisconsin, south of Milwaukee. Both say they are investigating election fraud claims, and both accuse state officials of violating election laws.

“We’ve been educating ourselves about elections,” Hayden told the gathering. “I’ve sent my detectives through — I’ve got a cyber guy. I sent him through to start evaluating what’s going on with the machines.”

Hayden, a Republican, did not elaborate and declined to be interviewed this week, citing what he said was his ongoing investigation. State and local election officials in Kansas said his office has not gained access to voting machines, and other Johnson County officials said there are no indications of any problems with the 2020 elections there.

The constitutional sheriffs’ group declares on its website that a sheriff’s power in a county is greater than that of any other official and “even supersedes the powers of the President.” Leaf filed a lawsuit in June against Michigan’s attorney general and secretary of state, accusing them of trying to stifle his investigation. He said a sheriff “has no superiors in his county.”

The “constitutional sheriffs” movement has gained visibility in recent years, as some sheriffs — including Hayden — resisted enforcing mask or vaccination requirements during the coronavirus pandemic.

“All of a sudden, it’s like the lights went on. It’s the sheriffs,” said Catherine Engelbrecht, founder of the election-conspiracy group True the Vote, speaking as part of a panel at the recent constitutional sheriffs gathering in Las Vegas. “That’s who can do these investigations. That’s who we can trust.”

It’s not clear how many sheriffs are part of the movement, though the national group’s founder, Richard Mack, said last year that about 300 of the nation’s 3,000 sheriffs were members, according to The Washington Post. Mack did not respond this week to telephone and email requests for an interview.

“It’s like a lot of these theories — it legally has no basis whatsoever,” said Stephen McAllister, the top federal prosecutor for Kansas during most of the Trump administration. “They are subject to state law. They are certainly subject to federal law. They are not sort of supreme little kings within their counties, whether they think so or not.”

Hayden said in a public statement that since the fall of 2021, he has received more than 200 tips alleging fraud in local elections. He said his department has a legal obligation to investigate “any criminal claim.”

But a memo from Peg Trent, Johnson County’s chief legal counsel, suggested Hayden went further in a July 5 meeting with her and county election officials.

Trent said Hayden questioned the use of ballot drop boxes at libraries, called for limiting the hours they would be available and offered to have his staff pick up the ballots. She said his staff also asked to have a deputy in the room as ballots are counted.

“As we discussed, my concern is that these requests give the appearance that the Sheriff’s office is attempting to interfere with an election,” she wrote in the July 7 memo, sent to Hayden, county commissioners and the county manager.

Hayden issued a statement that he would “whole-heartedly disagree” with her account of the meeting.

There is no evidence to support Trump’s claims of a stolen election in 2020 or to suggest widespread fraud or tampering with voting machines or ballot drop boxes. Dozens of legal claims made by Trump and his allies after the election were rejected by judges, including ones appointed by Trump.

“With the exception of a tiny handful of individual cases of voter fraud around the country, there is absolutely no reason to suspect that a crime was committed in 2020 with regard to the election,” said David Becker, a former U.S. Department of Justice attorney and election law expert who now leads the Center for Election Innovation and Research.

But false claims have sowed doubt among many Republican voters, triggered death threats to election officials and led to a host of new voting restrictions in GOP-controlled states. Trump allies have sought access to voting equipment and turned the normally routine process of certifying election results contentious.

“The danger of anyone embracing a conspiracy theory is the loss of confidence in election results,” said Chris Harvey, the former state elections director in Georgia. “It’s an added danger if it’s law enforcement. Their job is to enforce laws and maintain order. If they are seen as not having confidence in what’s going on, it’s just going to further trickle down into society.”

Kansas Secretary of State Scott Schwab, the state’s top election official, said Hayden has not contacted his office as part of his investigation. Schwab has repeatedly said he is confident that state elections ran well in 2020.

“I think overwhelmingly people trust the election system,” he said.

Hayden said during the Las Vegas gathering that his concerns about election fraud were piqued after Democrat Joe Biden carried Johnson County in the 2020 presidential election because the county had consistently “voted Republican” for more than a century. But that argument — made by election conspiracy promoters — ignores that Democrats have carried Johnson County multiple times in governor’s races during that time, including in Laura Kelly’s winning campaign in 2018.

Republicans maintain their traditional advantage in voter registration there, but Johnson County is more Democratic than it was 30 years ago.

“Johnson County going for Biden — well, that’s not an anomaly,” said Davis Hammet, leader of the Kansas voting-rights group Loud Light. “That happened in suburban counties all across the country.”