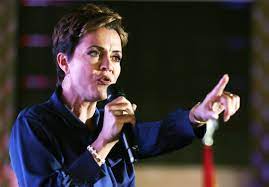 So, Kari Lake, the lunatic election denier who claimed she saw vote rigging and stealing going on in her primary has won her primary. So, evidently she will now have to concede because it was a rigged and stolen election right?

When the initial votes in Arizona started rolling in Tuesday night and Kari Lake was trailing, she and her fellow MAGA allies resorted to a familiar election-night tactic: They cried foul.

But overnight, Lake made up the ground she’d lost to Karrin Taylor Robson, her main rival for Arizona’s GOP nomination for governor. Now, on the cusp of winning the hotly contested primary, Lake and her allies found themselves squirming to explain how the election she was on track to win was still, somehow, as corrupt and fraudulent as they’d already claimed it was.

“There is no path to victory for my opponent, and we won this race, period,” Lake proudly declared to a group of supporters, but that didn’t stop her from cautioning them that fraud was occurring.

“But there’s a ton of problems with the system,” the candidate warned, before immediately predicting victory again.

“We are going to win this when the votes are counted,” the candidate said. “We are not going to take our election systems being this messed up.”

Before Lake even spoke, MAGAworld pundits were already at work spreading rumors, without evidence, that election wrongdoing was underway.

The far-right blog, The Gateway Pundit wrote that something “suspicious” had occurred in the race, adding that it was “another [Brad] Raffensperger special.”

As Lake trailed Robson late into the evening, others resurrected a set of conspiracy theories from November 2020.

One involved an allegation that poll workers deliberately distributed Sharpies to voters that would render their ballots invalid. A second, alleged election officials printed ballots on thinner-than-usual paper leading to would-be MAGA faithful ballots being tossed out due to ink bleed-through. Both were debunked shortly after it was raised after the election in 2020 when Arizona’s Pima County tweeted: “No ballots will be discarded because of the method used to color in the ovals,” referring to “Sharpiegate.”

“I had primal rage today when my family called me and said that they had to re-run their ballot through multiple times,” pro-Trump firebrand Charlie Kirk said. “because the Sharpie bled through the ballot.”

Similarly, far-right Real America Voice correspondent Ben Berquam, citing an alleged voter he spoke to, claimed that this time around, the ballots were printed on “thicker paper.”

MyPillow CEO Mike Lindell, an early and outspoken supporter of Lake, attempted to square the ideas of voter fraud and the belief of a decisive Lake victory.

“She won, what are you talking about? Of course, there was election fraud,” he told The Daily Beast in an interview on Wednesday. “She won in spite of the algorithm,” he added, attempting to reason obvious dissonance between the two ideas. So much corruption in Arizona!”

The Lake campaign didn’t return The Daily Beast’s request for comment and the race still had not by Wednesday night.

In fitting fashion for one of the far right’s most high-profile culture warriors and 2020 election conspiracists, Lake is now one crucial step closer to the top office of a key battleground state.

In a contest that became an expensive and nasty proxy war between factions of the GOP, Lake’s victory amounts to a triumph for the MAGA wing—and a blow to Republicans who were growing optimistic that the party might move past Trump’s cult of personality and his 2020 election obsession.

A well-known local news anchor turned political firebrand, Lake was endorsed by Trump and a number of Trumpworld luminaries and hangers-on. In turn, she endorsed baseless claims and narratives about the 2020 election, and amplified Arizona Republicans’ shambolic attempts to prove that Trump actually won the state.

Robson, meanwhile, had the backing of much of the state’s GOP establishment—including incumbent Gov. Doug Ducey, a Trump foe—along with former Vice President Mike Pence. Although she ran on hardline conservative positions on hot-button issues, Robson notably stayed away from Trump’s rhetoric on 2020 and said Republicans needed to move on.

Robson’s camp went all-in on a strategy to paint Lake as a phony, highlighting her previously liberal views and past support for Barack Obama. At one point, Robson’s allies ran an ad, narrated by a drag queen, attacking Lake for hanging out with drag queens before turning on them as part of the MAGA culture wars.

Although Lake led in initial polls of the race, Robson spent a staggering $15 million of her own money on her campaign, which funded an ad blitz that helped catapult her to within striking distance of Lake.

While some Arizona Republican voters were baffled that Trump endorsed Lake, given her history, some found her story—a member of the media turned anti-media crusader—compelling, not contradictory.

Beyond that, plenty of GOP voters in Arizona clearly still have an appetite for red meat about the 2020 election.

The stage is now set in Arizona for one of the most competitive and consequential governor races in recent memory. On Tuesday, Democrats nominated Katie Hobbs—the incumbent secretary of state who Lake called to throw in jail over baseless fraud allegations.