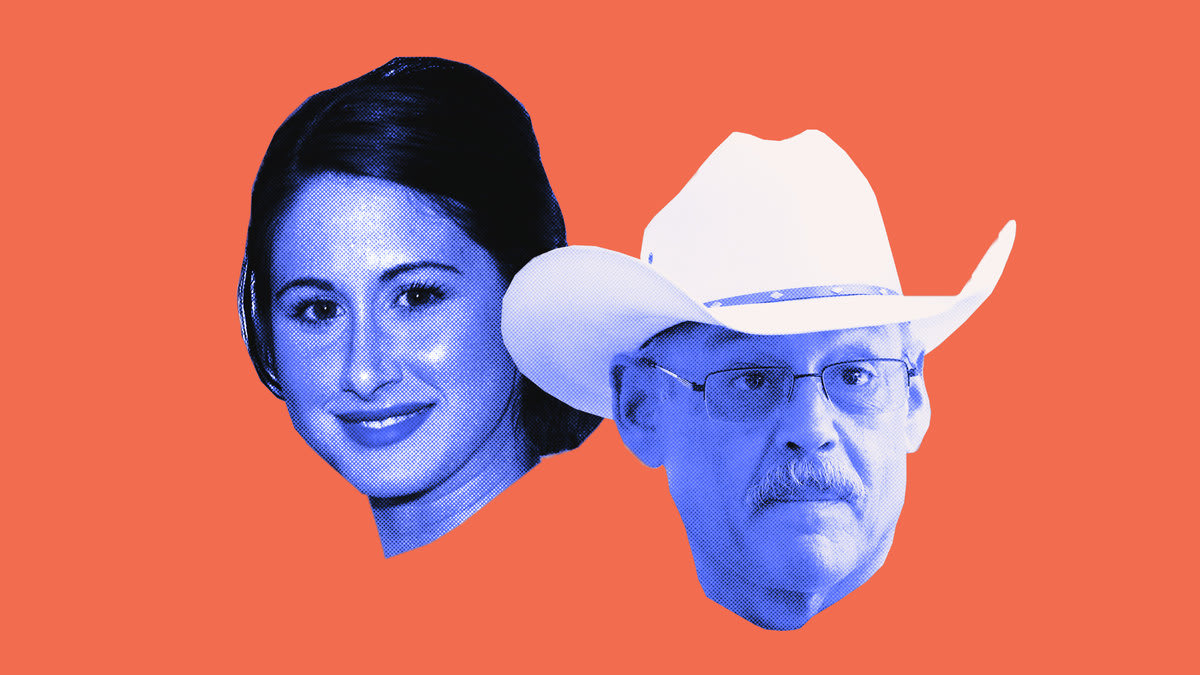 Mark Finchem is running to oversee Arizona’s elections, and he’s associating himself with some interesting characters.

Like many high-profile candidates for office before him, Mark Finchem—the Republican nominee for Arizona secretary of state—headed to California for a fundraiser last weekend.

Unlike basically any other high-profile candidate for office, Finchem had his fundraiser co-hosted by a self-identified “truther” who adheres to the QAnon conspiracy theory and has spent years propagating baseless lies like the Sandy Hook shooting being a staged “false flag” and Sept. 11 being an “inside job.”

The political world is well acquainted with those two ex-Trump advisers and their long records of incendiary statements and views. Less widely known, however, are those of the Newport Beach event’s co-host, Nicole Nogrady.

An ex-actor turned photographer and massage therapist, Nogrady was listed on the public advertisement for the Finchem fundraiser—promoted on his official campaign Twitter account—as a co-host, an honor that typically signals a meaningful level of personal involvement with a campaign.

To her social media followers, Nogrady has shared QAnon content and broadcast her support for a number of fringe conspiracy theories.

Just last week, Nogrady commemorated the anniversary of the Sept. 11 terrorist attacks by claiming on social media that they were staged. “The same people who orchestrated the event have been working hard behind the scenes to create their desired ‘One World Gov’t’ and have made us divided more than EVER before,” she said, calling 9/11 “the day the Deep State took thousands of lives.”

From 2016 to 2018, Nogrady posted on several occasions her view that the Sandy Hook shooting, in which 20 first graders and six adults were murdered, was fake.

Nogrady once wrote on Facebook that “no one died” in one of the most well-documented and excruciating public tragedies in recent memory. She went on to accuse the bereaved Sandy Hook families of being paid crisis actors.

“These families are all very much so $et for life both from deep state payouts and all of their Go Fund Me accounts,” Nogrady wrote. “This is all a game to them and the public are the pawns.”

In 2016, Nogrady referenced her career in film and TV—which included a lengthy stint as a body double on the ABC sitcom “Don’t Trust The B In Apartment 23”—to prove her outlandish theory.

“Working in the ‘Entertainment Industry’ woke me up to the fact that when presented with enough money – people will act, react, play, laugh, cry, and even ‘die’ to please their Director and rake in a good paycheck,” Nogrady wrote.

Sandy Hook was not the only target of Nogrady’s “truther” tendency. In October 2017, weeks after the mass shooting in Las Vegas that killed 60 people and wounded over 400, Nogrady shared articles alleging a “monster cover up” of the event by the FBI. “Your #FalseFlag operations won’t work on the public anymore,” she wrote.

In response to questions from The Daily Beast, Nogrady said her “PAST beliefs posted on social media from dates LONG ago are NOT tied in ANY way to Mark Finchem, his campaign, his team or last nights fundraiser.”

She also downplayed her role in the fundraiser, saying she was “simply part of the event for ticket sales and day of logistics,” which included “setting up tables and seating arrangements.”

Finchem’s campaign did not respond to questions about whether he was aware of Nogrady’s views before the Sunday fundraiser and whether he disavowed them.

Finchem’s association with Nogrady is just the most recent illustration of his singularly conspiratorial campaign for a powerful office in a key battleground state. The Trump-endorsed state representative, who has a real chance of becoming Arizona’s top election official, is perhaps more personally steeped in the right-wing fever swamps than any other high-profile Republican on the ballot.

Last week, The Daily Beast reported that before his August primary, Finchem delivered a speech in which he blamed former Vice President Mike Pence for inciting a “coup” to unseat Donald Trump after Jan. 6 and accused him of being responsible for FBI spying on the ex-president’s campaign in 2016. (Finchem was present outside the Capitol after it was breached on Jan. 6, according to video footage.)

The Newport Beach event on Sunday provided a few more proof points of Finchem’s position on the far right fringe. In a video of the event shared on Twitter by Alex Kaplan, a researcher at Media Matters For America, a woman onstage sang a Qanon-themed song at some point in the program. Its soaring chorus was “where we go one, we go all,” the unofficial slogan of the Qanon movement.

The fundraiser was also attended by Jordan Sather, a conspiracy theorist known as one of the earliest adherents of Qanon. He posted to social media that he was traveling to California to “shoot some videos” for the event. (He also claimed that two prospective venues had canceled on the organizers, citing death threats.)

Travis View, a Qanon researcher who hosts a podcast focused on the movement, said that Finchem is “unique” among prominent GOP politicians in having “zero qualms about associating with people who have some of the most out-there and vile views.”

“It’s really, really disturbing,” View told The Daily Beast. “We’ve had Qanon candidates before… it’s rare to see one so open about it.”

Finchem faces Democrat Adrian Fontes in what will be one of the most-watched down-ballot contests anywhere in the country this November. The prospect of Finchem controlling the elections in such a key state is a troubling one to many.

View argued that if Finchem is able to win his race while still actively embracing the Qanon community, it would set another troubling standard.

“It’d be a signal to other candidates,” he said, “that you don’t have to hide your ‘power level,’ as extremists like to say.”