Cassidy Hutchinson to cooperate with Atlanta-area probe of Trump 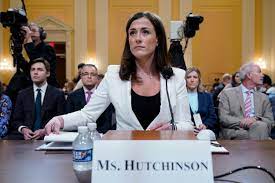 Former White House aide Cassidy Hutchinson is reportedly cooperating with an Atlanta district attorney’s investigation into former President Trump, his allies and their efforts to overturn the results of the 2020 presidential election.

CNN, citing sources familiar with the matter, reported on Monday that Hutchinson — who served as a special assistant to former Trump White House chief of staff Mark Meadows — is cooperating with the inquiry led by Fulton County District Attorney Fani Willis (D).

Hutchinson was a key witness for the House select committee’s investigation into the Jan. 6, 2021, attack on the Capitol, relaying information about what occurred at the White House in the lead up to and on the day of the riot. She testified with the panel behind closed doors and during a public hearing, where she delivered a number of explosive accounts.

Multiple news outlets reported in July that Hutchinson was cooperating with the Justice Department’s probe of Jan. 6.

The Hill has reached out to Hutchinson’s attorney and the Fulton County District Attorney’s Office for comment.

News of Hutchinson’s reported cooperation in the Peach State comes after Willis in August filed petitions for Meadows to testify before a special grand jury. The prosecutor also requested testimony from pro-Trump lawyer Sidney Powell and James “Phil” Waldron, who met with Meadows.

The Fulton County district attorney’s investigation into Trump and his allies was sparked by the January 2021 call that the then-president placed to Georgia Secretary of State Brad Raffensperger asking that he “find” the number of votes needed to give Trump a win in the state.

Meadows was present on the call.

The probe, however, has since grown in scope, including baseless claims of election fraud, fake elector plots, attempts by individuals to get a hold of voting machines in a county in the state and threatening remarks targeting election workers, according to CNN.

Meadows visited Cobb County, Ga., in December 2020 when a review of absentee ballots was underway. Hutchinson spoke about the trip with the House committee behind closed doors.

“The primary purpose of this trip was to visit family. His son lives in Georgia, and they went down to see his son for Christmas. Conveniently, his son lives in close proximity to Cobb County, and Mr. Meadows had discussed at length coordinating any visits with Georgia State officials during this trip,” she said.

“Now, there was a point where I was going to go with him because he was going to conduct a few more meetings, but then it was decided that he would make it a little bit more informal and casual, which is when he decided to go watch the ballots being counted,” she added.

CNN reported last week that Willis is looking to conclude her investigation after the November midterm elections and could start indicting individuals in December, according to sources familiar with the situation.

She has said the probe will enter a quiet period this month to steer clear of the impression that the investigation is attempting to sway the midterms, according to CNN.