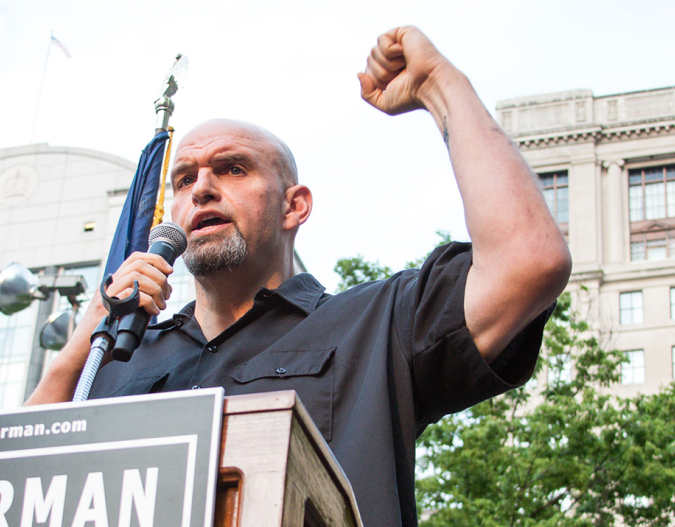 John Fetterman, the Democratic nominee in a crucial Pennsylvania Senate race, still struggles to understand what he hears and to speak clearly following a stroke in May.

In an exclusive broadcast interview with NBC News taped Friday at his home, Fetterman said both that his recovery “changes everything” and that it would not affect his ability to serve in the Senate if voters choose him over Republican Mehmet Oz.

“I don’t think it’s going to have an impact,” said Fetterman, who resumed his duties as Pennsylvania’s lieutenant governor in May but did not begin appearing at public campaign events until mid-August. “I feel like I’m gonna get better and better — every day. And by January, I’m going [to] be, you know, much better. And Dr. Oz is still going to be a fraud.”

In the wide-ranging interview, Fetterman discussed issues that have loomed large over the Pennsylvania race: abortion rights, crime and inflation, as well as how to tackle the opioid epidemic.

During the interview, Fetterman occasionally stuttered and had trouble finding words. He responded to oral questions after reading captions on a computer screen. “I sometimes will hear things in a way that’s not perfectly clear. So I use captioning so I’m able to see what you’re saying on the captioning,” Fetterman said.

He said the stroke, after which doctors implanted a pacemaking device with a defibrillator to monitor and regulate his heartbeat, has altered the way he communicates, including with his family.

“It changes everything,”  Fetterman said, responding to a question about how his recovery has changed his day-to-day. “Everything about it is changed.”

Fetterman, acknowledging the challenges he still faces, added: “But it gets much, much better where I take in a lot. But to be precise, I use captioning, so that’s really the maijing — that’s the major challenge. And every now and then I’ll miss a word. Every now and then. Or sometimes I’ll maybe mush two words together. But as long as I have captioning, I’m able to understand exactly what’s being asked.”

At one point, he struggled to articulate the word “empathetic” — toggling between the correct pronunciation and “emphetic” — and then pointed to that as an example of the effect of the stroke. Asked about those moments, Fetterman said searching for language is not a difficult experience.

“No, I don’t think it was hard. It was just about having to be thinking more, uh, sl, uh — slower — to just understand and that sometimes that’s kind of the processing that happens,” Fetterman said.

Fetterman’s health has been a major focus of a marquee race that stands out for its high stakes, low blows and tightening polls. But it hasn’t been enough to put Oz in the lead in any major survey, and Republicans are pouring millions of dollars into ads that portray Fetterman as soft on crime and that point to a 2013 incident when he detained an unarmed Black jogger at gunpoint (Fetterman was the mayor of Braddock at the time).

The Real Clear Politics average of polls on Monday suggest Fetterman has a 3.7 percentage point lead, much smaller than the double-digit advantage he enjoyed in the immediate aftermath of a contentious GOP primary that Oz won. Recent polls have shown his leads within the margin of error.

But Fetterman’s stroke, which occurred just before he won his primary, took the Democrat off the campaign trail and planted doubts in some minds about his health.

Pressed by NBC News why he declined requests to share his medical records and make his doctors available for interviews, Fetterman said he’s not aware of any undisclosed symptoms and argued that he has been open with the public about his health and recovery, including the auditory processing challenges. He has said that his cognitive function and memory are unaffected.

“I feel like we have been very transparent in a lot of different ways,” Fetterman said. “When our doctor has already given a letter saying that I’m able to serve and to be running. And then I think there’s — you can’t be any more transparent than standing up on a stage with 3,000 people and having a speech without a teleprompter and just being — and putting everything and yourself out there like that. I think that’s as transparent as everyone in Pennsylvania can see.”

Democrats are also pumping money into the state, one of their few pickup opportunities at a time when their control of the 50-50 Senate rests on party unity and the tie-breaking vote of Vice President Kamala Harris. Along with their counterparts in a handful of competitive states, Pennsylvania voters will have a say in which party controls the Senate come January.

For months, Democrats have painted Oz, a longtime New Jersey resident, as a tourist who used his fame as a television personality to profit from selling bogus “miracle” cures to consumers. Fetterman’s campaign has hounded him for refusing to take a position on a proposal from Sen. Lindsey Graham, R-S.C., to ban most abortions after 15 weeks of pregnancy.

“If you’re going to be our next senator, you have to give the answer,” said Fetterman, who opposes the Graham legislation.