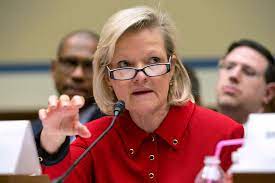 Inside the El Paso County clerk’s office in Colorado, where officials had gathered in July to recount votes in a Republican nominating contest for this year’s midterms, dozens of angry election watchers pounded on the windows, at times yelling at workers and recording them with cell phones.

In the hallway a group prayed for “evil to descend” on the “election team,” said the county’s Republican clerk Chuck Broerman. “It’s astonishing to me to hear something like that.” The election watchers had showed up to observe a five-day recount of votes for four Republican candidates who claimed the primary was fraudulent in a contest where they faced other Republicans.

Protesters had mobilized outside the clerk’s office, holding signs with the signature “Stop the Steal” slogan of former President Donald Trump and demanding the county get rid of its voting machines.

As the United States enters the final stretch to November’s midterm elections, Reuters documented multiple incidents of intimidation involving an expanding army of election observers, many of them recruited by prominent Republican Party figures and activists echoing Trump’s false theories about election fraud. The widespread voter fraud in the 2020 election as alleged by Trump and his supporters was never proven.

Interviews with more than two dozen election officials as well as representatives of groups driven by false theories about election fraud, and an examination of poll-watching training materials, revealed an intensifying grassroots effort to recruit activists. This has heightened alarm that disturbances in this year’s primary contests could foreshadow problems in November’s local, state and national races.

Officials and experts worry the campaign will deepen the distrust about America’s election process and lead to further harassment and threats to already besieged election workers.

During early voting in Arizona’s Pima County, an election observer was told to put away binoculars; another was caught looking at private voter data, and another was asked to stop making comments about “fraudulent elections,” according to a September report by the county recorder’s office reviewed by Reuters. State law forbids voter intimidation and obstructing election workers.

Pima county recorder Gabriella Cazares-Kelly said her election staff received multiple complaints from voters that individuals were shouting at them from outside the 75-foot circumference around polling stations, where interaction with voters is banned. “The concern is it makes them feel unwelcome,” said Cazares-Kelly.

Poll watchers have been a feature of American democracy since the 18th century, recruited by parties and candidates and regulated by state laws and local rules. People from both parties keep an eye on the voting – and each other – to make sure things go smoothly. In some places, poll “watchers” are different from “challengers,” who can point out people they suspect aren’t legal voters. In other states, poll watchers also do the challenging.

Groups that question the legitimacy of the 2020 vote have helped recruit thousands of observers who support dramatic changes to how Americans vote, including doing away with voting machines and returning to hand-counted paper ballots.

Officials say they are concerned observers intent on rooting out so-called voter fraud could cause unnecessary disruptions and long lines at polling places on Election Day.

“It’s a real concern,” said Al Schmidt, a former Philadelphia city commissioner who received death threats after the 2020 election for refuting false claims of voter fraud. “If these people show up to the polls with the intention of disrupting voting from taking place, then I can’t imagine a worse threat to democracy than that.”

Sandy Kiesel, who heads the Election Integrity Force in Michigan, said her poll “challengers” will be trained to be “polite, respectful and to obey the law.

“We’re not about trying to hassle poll workers,” Kiesel told Reuters. “It’s about transparency. If we can all see what’s going on, maybe we wouldn’t have these arguments whether elections are free and fair.”

In early October, an election-denying group called Audit the Vote PA held a Zoom meeting with almost 80 people that was billed as a “deep dive” poll watcher training session. The Pennsylvania group says Democrat Joe Biden’s 2020 win in the state was illegitimate.

During the call, which Reuters attended, participants compared notes on how to observe the testing of voting machines and when a hand count of votes can be requested, and discussed the legality of taking photographs in polling locations.

Toni Shuppe, Audit the Vote’s CEO, declined multiple requests for an interview with Reuters, but confirmed the group is “focused on encouraging people to become poll watchers in the upcoming November midterms elections.”

Andrea Raffle, the Republican National Committee’s director for election integrity in Pennsylvania, told participants on the call they had already filled 6,000 poll watcher positions in the state this year, compared with 1,000 in 2020. Raffle referred a request for comment to the RNC’s national office.

Election conspiracy groups also often appear at events with Republican officials, focused on recruiting volunteers to help watch the polls, according to the groups themselves and county officials. The Republican Party said it welcomes volunteers from many different groups, expects them to respect the law and to follow the party’s training. “Our program is independent of anything else,” said RNC spokesperson Danielle Alvarez.

The RNC has been pouring resources into recruiting observers and workers since being freed from the restrictions of a court-ordered consent decree in 2018. It expects to have trained over 52,000 poll watchers and workers between November last year and the coming election; it said comparative numbers for past elections were unavailable. The consent decree, which sharply limited the party’s ability to challenge voters’ qualifications, was put in place after the RNC, during a 1981 governor’s race in New Jersey, engaged in intimidation tactics targeted at minority voters.

A spokesman for the Democratic National Committee said they did not have a national number because state party offices manage their poll watcher recruitment. But the DNC says it has hired five staffers to work in North Carolina, Wisconsin, Nevada, Arizona and Texas to counter efforts to subvert the electoral process, including ballot counting and the certification of results.

“It was stressful,” she said. “If we refused to let the observers do something, they said you know you can be sued if you don’t allow us.”

She contacted the sheriff’s department after an observer trailed a poll worker’s car from a polling site to the election board. She said the sheriff’s office told her no laws had been broken. The Henderson County Sheriff’s Office did not respond to requests for comment.

In typical years, eight to 10 observers each from the Democrat and Republican parties would observe the county’s elections, Hebb said. This year, she had nearly 30 Republican Party observers alone, compared to the usual number of Democrats.

Some of the Republican observers later identified themselves as members of the North Carolina Election Integrity Team, a group linked to a nationwide effort led by lawyer Cleta Mitchell, a longtime Republican election lawyer and promoter of voter fraud theories who joined Trump’s legal team in his effort to overturn the result of the 2020 elections.

As head of the Election Integrity Network, Mitchell is training election observers and is trying to build grassroots networks of conservatives ahead of the midterms. In the first six months of 2022, her network hosted a series of training sessions for activists in Michigan, Pennsylvania, Wisconsin, Virginia, North Carolina, Georgia, Florida and Arizona.

Although Mitchell and other activists say the effort is nonpartisan, the project is funded by the Conservative Partnership Institute, a Washington nonprofit organization with deep ties to Trump’s political network. Mark Meadows, Trump’s former chief of staff, is listed as the organization’s “senior partner.” Trump’s political action committee, Save America, gave the group $1 million in 2021, campaign finance records show. Meadows and Mitchell did not return requests for comment.

The prospect of scores of unofficial observers turning up at polls already convinced the election system is rigged and assuming election officials are corrupt is a “tinder box” that could easily explode, said Chris Harvey, Georgia’s election director in 2020.

“People are passionate about politics, and if there’s anger and confrontation at the polls, it gets ugly and really dangerous really quickly,” he said.