MTG Threatens McCarthy: He’s Going to ‘Give Me a Lot of Power’ or GOP Base Will Be Sorry 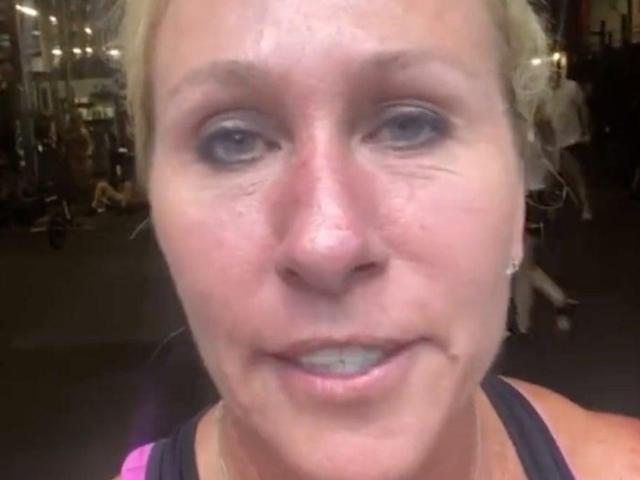 Marjorie Taylor Greene threatens Kevin McCarthy with the usual: if I get elected you’re going to give me POWER, if not, YOU’LL BE SORRY tough talk!!!!

What a bunch of horse shit. That bitch, a cross between a horse and mule, has no power now, nor will she ever get power in the future. All she has are threats, and if things aren’t done her way, it’s the highway to hell for everyone else. No wonder her husband got fed up with her and filed for divorce. He couldn’t stand waking up to her nasty stanky smell day after day.

Rep. Marjorie Taylor Greene (R-GA) was full of swagger in an interview with The New York Times, boldly predicting that if the Republican Party wins back the majority in the House in the midterm elections, she’d have “a lot of power” — even going so far as to say that if that didn’t happen, the Republican base would wreak vengeance upon Republican House Leader Kevin McCarthy (R-CA).

Greene spoke with the Times‘ Robert Draper multiple times over recent months and their conversations were collected in a long article published in the New York Times Magazine Monday morning, titled “The Problem of Marjorie Taylor Greene.”

The first-term Georgia congresswoman was stripped of all her committee assignments after a series of abhorrent comments and threats and has been nearly completely ineffective as a legislator, sponsoring only a handful of bills, none of which have become law.

But the blunt reality is that Greene’s re-election bid against Democrat Marcus Flowers has a massive, likely insurmountable advantage: it’s one of the deepest-red districts in the country. Georgia’s 14th congressional district voted for former President Donald Trump in overwhelming numbers both times: 75% to Hillary Clinton’s 22.1% in 2016 and 73.4% to Joe Biden’s 25.3% in 2020.

So she’s almost certainly heading back to Congress for a second term to begin next January. What that might look like depends on how many people with an (R) after their name join her.

Greene told Draper she expects to see “a lot of investigations” if the GOP retakes the majority, including seeking to impeach Biden. She scoffed at those who doubted McCarthy would support such a move, saying while her “style would be a lot more aggressive, of course,” than the GOP House leader, and he would need to have “evidence,” she still thought it was people “underestimat[ing] him, in thinking he wouldn’t do it.”

She went on to explain why she thought McCarthy as Speaker would have to follow her far more aggressive style, because the GOP base wanted payback for the “witch hunt” against Trump.

“I think that to be the best speaker of the House and to please the base, he’s going to give me a lot of power and a lot of leeway,” Greene told Draper in what he described as “a flat, unemotional voice.”

“And if he doesn’t, they’re going to be very unhappy about it,” Greene continued. “I think that’s the best way to read that. And that’s not in any way a threat at all. I just think that’s reality.”

Greene has been a prolific fundraiser, raking in millions of dollars from supporters across the country, and has gone out on the campaign trail to stump for fellow MAGA candidates like Kari Lake in Arizona and J.D. Vance in Ohio.

A GOP majority could even result in a new leadership position being created for Greene, Draper reported. McCarthy’s spokesman denied he had offered this to Greene, but she was coy when Draper asked her about it:

When I asked Greene if the report was inaccurate, she smiled and said, “Not necessarily.” But then she added: “I don’t have to have a leadership position. I think I already have one, without having one.”