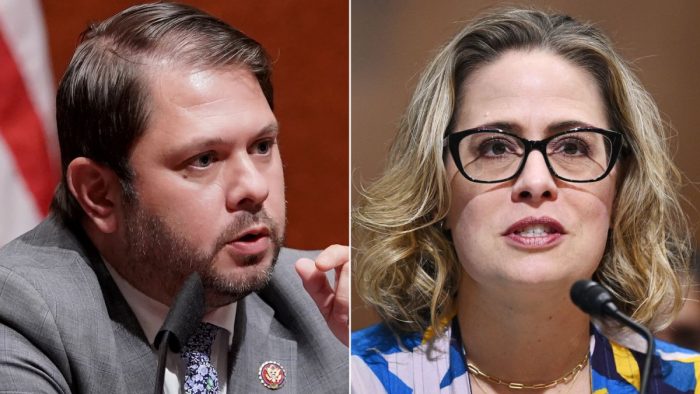 Gallego, an outspoken liberal Democrat, has long been critical of Sinema, who dropped her party identification as a Democrat to be an independent just after the party won the Senate last year. The Arizona senator still aligns herself with the Senate Democratic caucus, though.

Sinema said at the time that she changed her party affiliation because she “never fit neatly into any party box”, but the label switch prompted an immediate backlash from many Democrats, including Gallego.

Democratic sources close to Gallego say the Marine veteran plans to launch his Senate campaign with a video, in both Spanish and English on Monday and then launch a national media tour to promote his announcement.

The news was first reported by Newsweek.

Gallego told CBS News’ Robert Costa in December that some Democratic senators had been privately urging him to run against Sinema.

“There have been some senators that have encouraged me to run,” Gallego said. “There are some senators, some of Sen. Sinema’s colleagues, that are encouraging me to run.”

Gallego did not identify the senators who  prodded him to jump into the Senate race, but he believes those senators would “absolutely” support his Senate bid.

Sinema has yet to announce whether she is going to run for reelection in 2024.

Gallego, who is of Mexican and Colombian descent, currently chairs the Congressional Hispanic Caucus’ BOLD PAC, an increasingly influential fundraising vehicle for Latino congressional Democrats. He has said he plans to pursue the support of young voters, progressive and Latino voters in the battleground state of Arizona. In his interview with Costa in December, Gallego said he thought his bid could help President Joe Biden’s own reelection prospects in the state.

“I will say this: If I was running for president in Arizona in 2024, I would want to be with someone that would be proud to be going on stage with him and going to every part of Arizona,” Gallego said in his interview w/ CBS in December. “More importantly, getting out the crucial Latino vote. Time will tell what the calculations are over there. I don’t need to pressure them. They’re certainly not pressuring me. But I know what a strong candidate I am and can be.”

But Gallego’s bid comes with potential risks for Democrats, who are defending at least 23 seats in the 2024 cycle. Arizona’s voters are almost evenly split three ways between Democrats, Republicans and independents and as 2022 election results prove, the Grand Canyon State’s residents still narrowly favor moderate candidates. Gallego’s more outspoken, strident views on issues like economics, immigration and health-care clash with Sinema’s centrist approach that has earned praise from Republicans who say she’s been a key moderating force in the evenly divided Senate.