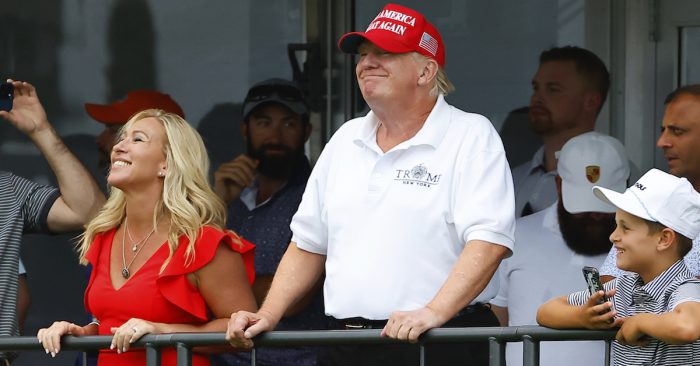 Rep. Marjorie Taylor Greene (R-GA) is looking to join Donald Trump’s 2024 presidential campaign as his new vice presidential pick, according to a new report from NBC.

NBC’s Jonathan Allen reported on Wednesday that multiple people have spoken to the Georgia congresswoman and heard about her weighty ambitions. The second-term congresswoman has managed to align herself with the top Republican in the House, Rep. Kevin McCarthy (R-CA), acting as one of the Republican’s most vocal allies in his fight to become House speaker.

Former Trump advisor Steve Bannon told NBC that Greene is “not shy” about wanting to be Trump’s VP and she believes she’s currently on a shortlist.

“She sees herself on the short list for Trump’s VP. Paraphrasing Cokie Roberts, when MTG looks in the mirror she sees a potential president smiling back,” Bannon said.

The conservative strategist called Greene aligning herself with McCarthy during the speaker battle a very deliberate “power move” that set her up with committee positions and as a real “player” in her party.

“She was prepared to take the intense heat/hatred short-term for the long-term goal of being a player,” he said.

A second source was not as willing to throw his name out there Bannon-style, but the reported ally of Green’s revealed the congresswoman has been clear her “ultimate goal” is to become vice president.

Trump hasn’t floated any serious possibilities for his VP pick, but it’s highly unlikely to be former Vice President Mike Pence. The two had a falling out over the January 6 Capitol riot and Trump’s election fraud conspiracy theories. Trump also appeared to recently mock Pence after he turned over a number of classified documents to authorities as Trump himself and President Joe Biden are facing probes into their handling of classified materials.