August 31, 2012- WASHINGTON — A new report from Congress' nonpartisan research arm suggests that the Internal Revenue Service won't have much patience with the argument from groups like Karl Rove's Crossroads GPS that the ads it buys shouldn't be counted as political campaign activity.

The claim that ads attacking candidates aren't political — as long as they avoid words like "vote" or "elect" — is key to the empire of shadowy non-disclosing political groups that Rove, the Koch Brothers and other major political players have created.

By insisting that most of their budget goes toward "issue advocacy," rather than influencing elections, these groups exploit a loophole that allows certain non-political groups to keep their donors secret.

August 31, 2012- On the final morning of the Republican National Convention, Karl Rove took the stage at the Tampa Club to provide an exclusive breakfast briefing to about 70 of the Republican Party’s highest-earning and most powerful donors. During the more than hour-long session, Rove explained to an audience dotted with hedge fund billionaires and investors—including John Paulson and Wilbur Ross—how his super PAC, American Crossroads, will persuade undecided voters in crucial swing states to vote against Barack Obama. He also detailed plans for Senate and House races, and joked, “We should sink Todd Akin. If he’s found mysteriously murdered, don’t look for my whereabouts!”

Then Rove pleaded with his audience for more money—much more.

July 25, 2012- A third complaint has been filed with the Federal Election Commission alleging that Crossroads GPS, a group co-founded by Republican strategist Karl Rove, has been unlawfully hiding its donors from the public by masquerading as a “social welfare” organization.

Citizens for Responsibility and Ethics in Washington (CREW) filed the complaint on Tuesday, claiming the pro-Republican group failed to report TV ads it ran against three Democratic Senate candidates to the FEC.

“Crossroads GPS wants to have its cake and eat it too. Karl Rove’s secretive 501(c)(4) wants to run political ads without complying with the disclosure rules applicable to such ads,” said CREW Executive Director Melanie Sloan. “By disguising political ads as issue ads, Crossroads is trying to do an end run around the law.” 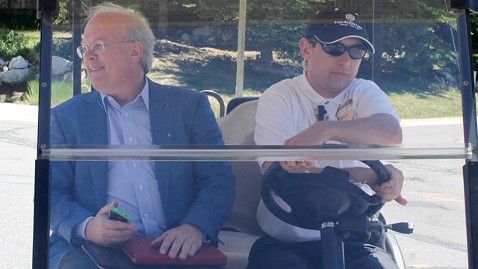 June 16, 2012- Casino billionaire Sheldon Adelson, whose net worth makes him one of the world's richest men, is on a check-writing spree that will soon bring his total political contributions in this election cycle to at least $71 million, according to sources familiar with his spending. That money is spread across the spectrum of GOP super PACs, which are required to disclose donors, and nonprofits, which are not.

Adelson and his wife, Miriam, along with other family donations, have already reached $36 million, including $10 million to the Romney-backing super PAC Restore Our Future that was reported this week. But two GOP fundraisers familiar with his plans say that Adelson has given or pledged at least $35 million more to three conservative nonprofit groups: the Karl Rove-linked Crossroads GPS, another with ties to billionaires Charles and David Koch and a third with links to House Majority Leader Eric Cantor (R-Va.).

June 9, 2012- WASHINGTON — Secret campaign money is making its big comeback in 2012, playing an important role in a presidential election for the first time since corporate titans flew into the nation's capital in the early 1970s carrying satchels of cash for Richard Nixon’s slush funds.

For the country's top political consultants and media buyers, that means a huge new revenue stream — and long shadows to hide in.

Campaign committees and super PACs need to report to the Federal Election Commission who they pay and how much they pay them. According to a Huffington Post analysis, the top 150 consultants and media buyers have already grossed $466 million so far this election cycle.