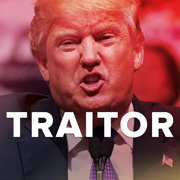 Last week, Donald Trump encouraged the Russian government to spy on the United States. In the wake of his unprecedented statement, members of the intelligence community – and more than 170,000 CREDO activists – have called for Trump to be denied access to classified national security briefings.

In addition to the outrage over Trump’s shocking comments, recent media coverage has raised questions about financial ties between Trump and Russian oligarchs with close connections to Putin;1 highlighted longstanding relationships between high-ranking Trump advisors and pro-Russian politicians and oligarchs;2 and flagged a change to the Republican party platform position on Ukraine that seems out-of-step with Republican policies but in-line with Russia’s policy agenda in the disputed region.3 There has also been widespread reporting that Russian secret intelligence was behind recent cyber attacks on Democratic political organizations, and leaks which seemed timed to help Trump’s campaign.4

Taken together, the mounting evidence of ties between Trump and Putin provides reason for concern that Trump’s connections and financial obligations to Russian political and financial players could present a conflict of interest in a Trump presidency. There is also reason for concern that Russian government interests would be served by interfering with the U.S. electoral process.

We need to speak out now to pressure Congress to step in and investigate these risks to the integrity of the presidency and the electoral process.

Tell Senate Majority Leader Mitch McConnell and Speaker of the House Paul Ryan: Launch an immediate investigation into the relationship between Donald Trump and the Russian government.

Republicans in Congress have been relentless in using their power to call sham committee hearings and squandered millions of dollars in taxpayer money to set up and run special investigative committees to pursue their extreme right-wing agenda against Planned Parenthood, American Muslims, and Hillary Clinton, among others.

Now, it is time for them to address an actual controversy. Given the growing concern of the intelligence community and the American public about Trump’s ties to Russia, there is no excuse for not launching an investigation now.

Tell Senate Majority Leader Mitch McConnell and Speaker of the House Paul Ryan: Launch an immediate investigation into the relationship between Donald Trump and the Russian government.

Republican leaders in Congress must investigate any and all potential Trump connections with Russia in order to ensure the integrity of our elections and that American voters are informed about any conflicts of interest when it is time for them to vote. The issues they must investigate include:

Republican leaders in Congress are relentless in trying to designate themselves the guardians of our national security, even when their political gamesmanship demonizes and endangers Americans at home and abroad. It would be the height of hypocrisy for them to refuse to investigate evidence that a presidential candidate might have competing loyalties between the United States and a hostile foreign government.

The more of us who add our voices, the harder it will be for Sen. McConnell, Rep. Ryan and the other leaders in the Republican Party to sweep these reports under the rug and go on with presidential politics as usual. Click the link below to demand they launch an investigation immediately into Trump’s ties to Russia.

Thank you for speaking out.