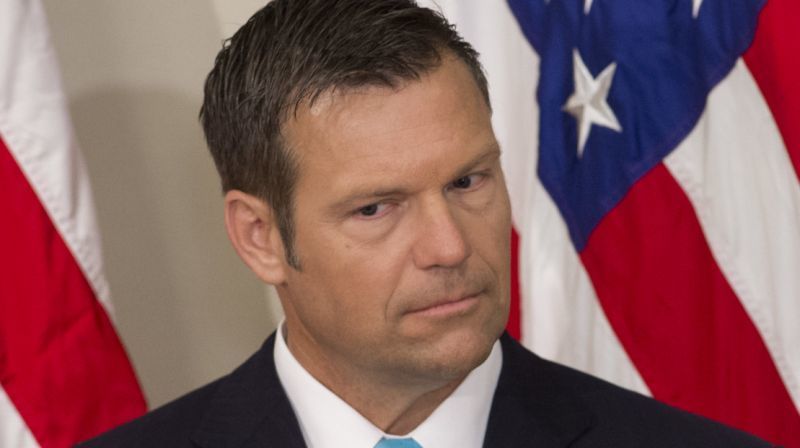 The judge said the law championed by the Kansas Secretary of State Kris Kobach violated federal law and the 14th Amendment.

A federal judge on Monday permanently blocked Kansas from requiring people to provide proof of citizenship when they register to vote.

The decision is a defeat for Kansas Secretary of State Kris Kobach (R), who championed the law requiring proof of citizenship. The ruling is significant because Robinson rejected the evidence that noncitizen voter registration is a widespread problem in Kansas. Kobach, who has advised President Donald Trump on voter fraud issues, has been a loud advocate for the idea that voter fraud is a widespread problem, despite several studies and investigations that have shown the contrary.

Kobach chose to personally defend his own office at trial, and Robinson repeatedly admonished him for failing to follow proper rules of federal civil procedure to introduce evidence.

In her Monday ruling, Robinson sanctioned Kobach with six hours of continuing legal education related to rules of civil procedure or evidence.

Kobach has already previously been sanctioned twice in the trial for misleading the court about the contents of emails and failing to properly notify voters they were eligible to vote after Robinson initially blocked the law in 2016.

The Kansas law, passed in 2011 and enacted in 2013, required Kansans to provide one of a series of pre-approved documents, like a passport or a birth certificate, to prove their citizenship when they registered to vote. If they failed to provide that proof within 90 days of registering, Kobach could cancel their registration. By March of 2016, before Robinson issued her preliminary injunction, 16,319 people had their registrations canceled in this way. Overall at that time, 31,089 were blocked from registering for failing to provide proof of citizenship.

To uphold the Kansas law, Kobach had to show that “substantial” numbers of noncitizens were registering to vote in Kansas.

Kobach offered 129 instances from 1999 of noncitizens who registered or attempted to register to vote, but offered a series of experts to back up his argument that there could actually be thousands on the rolls.

The court was not convinced.

“Defendant insists that these numbers are just ‘the tip of the iceberg.’ This trial was his opportunity to produce credible evidence of that iceberg, but he failed to do so,” Robinson wrote in her opinion. “Instead, the Court draws the more obvious conclusion that there is no iceberg; only an icicle, largely created by confusion and administrative error.”

“This decision is a stinging rebuke of Kris Kobach, and the centerpiece of his voter suppression efforts: a show-me-your-papers law that has disenfranchised tens of thousands of Kansans,” said Dale Ho, director of the ACLU’s voting rights project, which represented five Kansans, who were blocked from registering, who challenged the law. “That law was based on a xenophobic lie that noncitizens are engaged in rampant election fraud. The court found that there is ‘no credible evidence’ for that falsehood, and correctly ruled that Kobach’s documentary proof-of-citizenship requirement violates federal law and the U.S. Constitution.”

She also ordered Kobach to provide training materials and guidance to county election officials to make it clear that people do not need to prove their citizenship in order to register to vote and to make sure that was clear online.

The ACLU had argued Kobach was not adequately educating voters and election officials on the status of the proof of citizenship requirement.

Ruling in favor of Parker Bednasek, a University of Kansas student who was blocked from registering, Robinson said that the Kansas law violated the equal protection clause of the 14th Amendment because the state’s interest in preventing noncitizen voter registration did not outweigh the burden the proof of citizenship law placed on voters.

Kobach’s office said Monday evening that Robinson’s ruling was incorrect and that he would appeal to the U.S. Court of Appeals for the 10th Circuit.