The January 6 Committee Reminds America Midterms Are About MAGA Insurrection 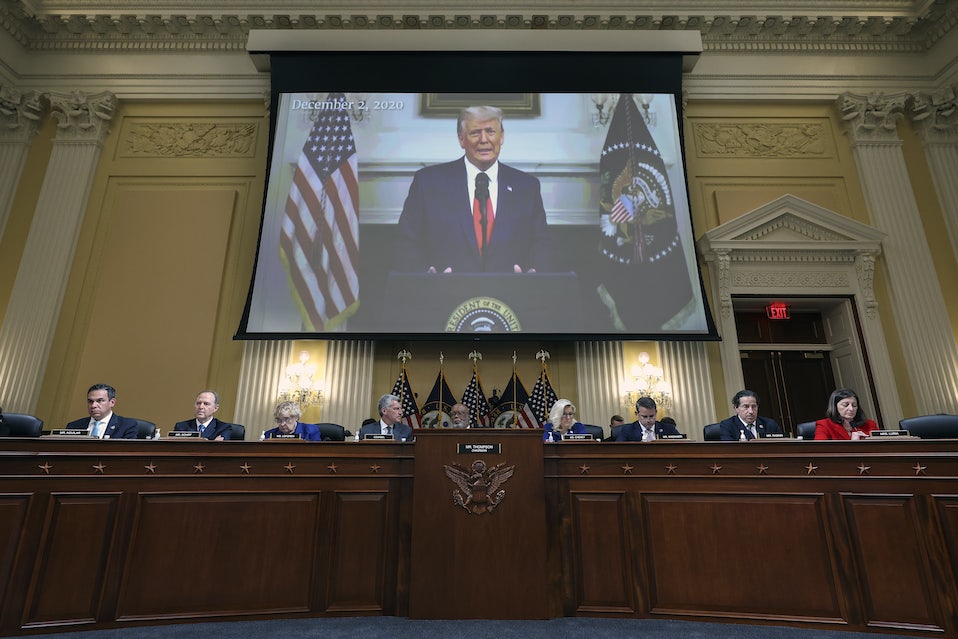 By subpoenaing Donald Trump, the stakes are set for how the former president might escape justice if Democrats lose the House.

Talk about going out with guns blazing. The House January 6 committee, at the conclusion of what is likely to be its last public session, voted unanimously to subpoena Donald Trump. Near the end of the hearing on Thursday, committee Chair Bennie Thompson explained the rationale for this extraordinary event. “Donald Trump led an effort to upend American democracy,” he said, “that directly resulted in the violence of January 6.”

With less than 12 weeks left in this session of Congress, some may dismiss the move as a quixotic gesture. Trump will undoubtedly resist the subpoena as he employs all his standard legal tactics of distort, distract, and delay. Then, if Republicans win a majority in the midterms, the special committee will be dissolved, the subpoena dropped, and many GOP House members will claim that Trump was railroaded.

But the effort to compel Trump to testify is as much about 2022 politics as it is about legalities. The move to hold Trump to account for what committee member Adam Schiff called “the president’s chilling and stunning passivity” on January 6, 2021, could now become a central issue in the closing weeks of the midterm campaigns. The message is now simple: “Unless you elect a Democratic House, Donald Trump will get away with it.”

Make no mistake, most voters hold Trump at least partly responsible for the insurrection. A late September Monmouth University Poll found that 38 percent of Americans believe that Trump caused the worst attack on the Capitol since 1814, while another 25 percent believe that he encouraged the rioters. Only one-third thought he did nothing wrong. On this question, Americans offer a much more unforgiving verdict on Trump than Kevin McCarthy and the other GOP enablers in the House.

The opening minutes of the ninth hearing of the committee were partly a greatest-hits album of the facts already established. But once the hearing began to focus on new information and videos, it became riveting. For the first time, we saw Nancy Pelosi and Chuck Schumer pleading for help on calls with the governors of Virginia and Maryland as the mob ransacked the Capitol. Talking with acting Attorney General Jeffrey Rosen, Pelosi said bluntly, “They’re breaking windows and obviously ransacking our offices.… Much of it at the instigation of the president of the United States.”

In many ways, Pelosi has been the off-stage star of the hearings. The speaker broke with tradition when Kevin McCarthy tried to fill two of the GOP seats on the committee with right-wing ranters Jim Jordan and Jim Banks. When Pelosi blackballed the two professional disrupters, McCarthy vowed to boycott the committee. The result: Pelosi instead named stalwart anti-Trump Republicans Liz Cheney and Adam Kinzinger to the committee.

All the committee’s innovations—ranging from the extensive use of video depositions to the disciplined pace of each session—were only possible because all nine members were united in the quest for truth. Cheney was right when she said in her opening statement, “We recognize that some principles must be beyond politics.” No moment made that clearer than the final minutes of Thursday’s session, when each member solemnly affirmed their “aye” vote in favor of issuing the subpoena for the former president’s testimony.

As tempting as it is, it is unfair to compare the January 6 committee to the Senate Watergate hearings. Stretching over 237 hours of televised testimony, the Watergate hearings resembled the soap operas they preempted every day on the TV networks. In contrast, the current hearings—with a laudable lack of congressional bloviating—were the equivalent of a nine-episode prestige mini-series airing weekly on HBO.

The Watergate hearings did not lack for dramatic moments, whether it was a repentant John Dean telling the committee that he informed Richard Nixon that “there was a cancer growing on the presidency” or Alexander Butterfield revealing the existence of the White House taping system.

This time around, it was a nervous but determined junior White House aide named Cassidy Hutchinson whose testimony dominated the hearings. No one who watched Hutchinson can ever forget the imagery of a president leaving ketchup stains on the White House wall after he literally tossed his lunch in rage. More important, Hutchinson detailed the struggle in the president’s limousine as Trump demanded to be driven to the Capitol.

In the wake of Hutchinson’s testimony in late June, Secret Service agents—mostly talking off the record—belittled the accuracy of her story. But Thursday’s hearing presented a series of text messages from Secret Service agents underscoring Trump’s determination to join the insurrectionists at the Capitol. “The committee is reviewing testimony regarding potential obstruction on this issue,” Representative Pete Aguilar warned after presenting this material, “including testimony about advice given not to tell the committee about this specific topic.”

As the public hearings presumably draw to a close, it is impressive how much we have learned about January 6 despite stonewalling by Trump insiders. Cheney detailed the more than 30 recalcitrant witnesses who invoked their rights against self-incrimination. These Fifth Amendment insurrectionists included sleazy political consultant Roger Stone, unhinged former national security adviser Michael Flynn, and bizarro legal theorist John Eastman. That doesn’t count unshaven MAGA theorist Steve Bannon, who has been convicted of contempt for resisting a subpoena, plus Trump’s spineless last chief of staff, Mark Meadows, who is facing his own contempt case.

What we also don’t know is the lasting legacy of the committee. So much depends on how Trump is regarded in the years to come—as the greatest threat to democracy in modern memory or as the once-and-future president? It also remains telling that only since the hearings began has Merrick Garland’s Justice Department dramatically picked up the pace of its multiple investigations of Trump’s lawless conduct.

As for the January 6 committee, it deserves the praise embedded in a line from the aftermath of Watergate: “This time the system worked.”