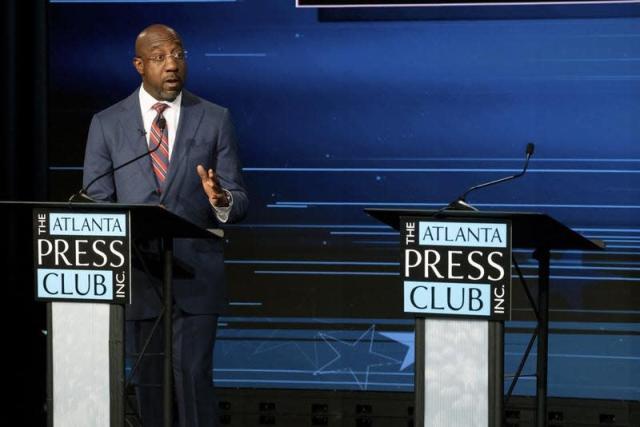 Herschel Walker decided that his last debate performance with Warnock was a success, and so successful that he didn’t think he needed another debate. So Warnock went into it by himself and was able to hammer home the problems with Herschel Walker:

Warnock: He said he graduated from college. He didn’t. He said he was valedictorian. He wasn’t. When I said he pretended to be a police officer, he presented a badge as if that were proof and now he wants us to think he’s a Senator..

Warnock: He said he graduated from college. He didn’t. He said he was valedictorian. He wasn’t. When I said he pretended to be a police officer, he presented a badge as if that were proof and now he wants us to think he’s a Senator.. pic.twitter.com/L5kOXP3XDr

Warnock was introduced along with Libertarian candidate Chase Oliver, while Walker was represented by an empty lectern.

“I think it’s important to point out that my opponent Herschel Walker is not here,” Warnock said at the outset of the debate, “and I think that half of being a senator is showing up. That’s half of life. And I have shown up for the people of Georgia time and time again.”

Warnock faced off against Walker in a debate on Friday, marking the first and only time the two candidates will meet face-to-face before next month’s election.

The race between Warnock, a pastor who defeated former Sen. Kelly Loeffler (R-Ga.) in a special election last year, and Walker, a businessman and former football star, is one of the most closely watched in this year’s election cycle. And a potential runoff in the race, which would happen if no candidate receives more than 50 percent of the vote, could once again decide control of the Senate.

Walker, who is endorsed by former President Trump, sent mixed signals about his participation in the Atlanta Press Club debate. In July, he said he would take on Warnock any time but that his campaign needed to negotiate specifics.

In a statement on Sunday, Walker’s campaign suggested the organizers of the Atlanta Press Club debate were biased in Warnock’s favor.

“It was unfortunate to see that even in his second try at a debate, Raphael Warnock couldn’t give a single direct answer,” Walker spokesperson Will Likely said in a statement. “Winners don’t need a second try and Herschel Walker was the clear winner of Friday night’s debate.”

Walker will join Fox News host Sean Hannity for a town hall on Monday, to be taped in the afternoon and aired at 9 p.m.

Despite Walker’s absence Sunday, Warnock repeatedly took shots at his GOP challenger Sunday night, saying his opponent had not come clean about the “basic facts” of his life and was a serial liar.

“I have never been violent to anybody for any reason. I have spent my entire life as a citizen, as a pastor of Dr. King’s church steeped in the philosophy of nonviolence,” he said.

“My opponent, on the other hand, has a well-documented history of violence and he hasn’t come clean about it.”

Walker’s ex-wife has said that he held a gun to her head and threatened to kill her, a claim that was featured in an attack ad earlier in the campaign.

Another woman, who is the mother of one of Walker’s children, has said he paid for her to receive an abortion, despite campaigning in support of strict abortion bans. Walker has denied the accusation.