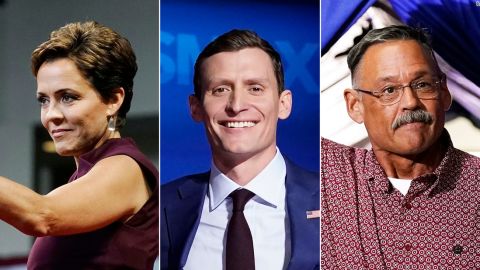 Some people say the reason extremists get elected in Arizona is because of the extreme heat there. It gets so hot in the summer, at times 135 degrees in the shade, that anyone who lives there gets their brains melted. Maybe that is why it’s so hard for normal, sane people to get elected in Arizona.

The present and questions about the future are coming together in the dry heat.

You can use Arizona to answer immediate questions about 2022: about control of both the Senate as well as the House and about statewide races in a volatile and critical environment.

You can also use the state to gain insight into trends: of demographics and political destinies and of the future of both the Democratic and Republican parties.

The present and profound questions of the future are coming together in the dry heat — and, yes, it is still hot into voting season. Arizona voters are choosing leaders for the future and also choosing between competing versions of the past that are so strongly held that they could easily impact future elections.

The Senate race could well determine party control. Between fast-growing suburbs, new residents coming for jobs or retirement, split-ticket trends and an increasingly up-for-grabs Latino population, broader forces are everywhere, even as the ads and attacks use national figures as foils.

For all the attention on Congress, the statewide contests could prove even more important. Republicans seeking all of the major statewide offices continue to question the legitimacy of the 2020 election and won’t definitively commit to certifying future results they don’t agree with.

A split decision could be a fitting ending in divided times — though not all outcomes have equal consequence.

(“GMA3” on Friday and “This Week with George Stephanopoulos” on Sunday will both broadcast live from Phoenix, featuring interviews with both Hobbs and Lake.)

The RUNDOWN with Averi Harper

While many high-profile Democratic candidates have kept their distance, President Joe Biden countered on Thursday that he is in demand for appearances on the campaign trail.

“I got about 16 to 18 requests around the country,” Biden told reporters during a Pennsylvania stop with Senate Democratic candidate Lt. Gov. John Fetterman.

Fetterman had made himself scarce during Biden’s earlier trips to the commonwealth. But Thursday he showed up in a suit and tie — a contrast to his usual wardrobe of shorts — to greet the commander-in-chief.

Biden has said this, on more than one occasion, of his stumping: “I’ll come campaign for you or against you. Whichever will help the most.”

The Biden-ism is seemingly an acknowledgment of political baggage — namely the low approval numbers he drags with him whenever he goes to a battleground state.

Rather than large, rally-style events (akin to the ones former President Donald Trump continues to hold for his endorsees), Biden is slated to continue holding events focused on legislative wins since he took office and fundraising with candidates in the run-up to Election Day.

The TIP with Alisa Wiersema

The start of early voting across several battleground states indicates a potentially record-breaking midterm turnout. According to data from the U.S. Elections Project, more than 5 million ballots have been cast across 17 states and, with weeks to go until Nov. 8, overall turnout is likely to be on par with that of 2018.

In Ohio — where Trump won in 2020 with 53% of the vote — incumbent Secretary of State Frank LaRose on Wednesday addressed the increase of early voting in his state while touring a Cuyahoga County Board of Elections site. LaRose was joined by a bipartisan pair of county officials and stressed the nonpartisan nature of election administration.

“There has been an increase in in-person early voting,” LaRose told ABC News’ Paulina Tam. “I think you can attribute this to the fact that a lot of Ohioans tried voting absentee for the first time in 2020 and they liked it. They realized how convenient, how secure it is.”

LaRose added that this outcome is “great news.”

After record turnout in both the 2018 and 2020 elections, voters in Georgia are also turning out in historic numbers. Among those voting early was Democratic gubernatorial candidate Stacey Abrams, who cast her ballot at a YMCA in DeKalb County on Wednesday. Despite the high voter turnout across her state — as of Tuesday, Georgians had already cast more than 430,000 ballots — Abrams argued that hurdles could still exist.

“Having more people turn out does not mean there aren’t barriers. That’s like saying ‘because more people get in the water, there are fewer sharks.’ The sharks are still out there,” Abrams said during a news conference, ABC News’ Lalee Ibssa reports.

According to the U.S. Elections Project, voters who identify as Democrats have so far cast 52% of early ballots, while Republican voters cast nearly 30%. Voters who do not identify with either party cast just over 18% of early ballots thus far.