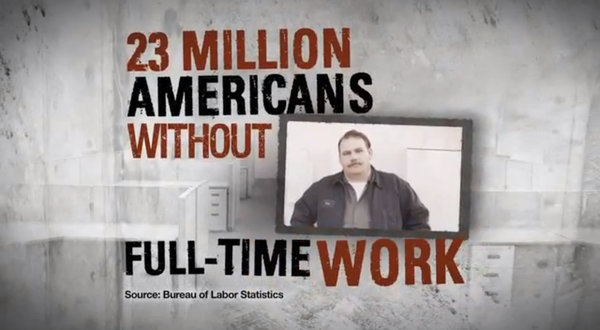 So they operate largely from the same playbook, sharing polling data and focus group research to develop many of the same lines of attack. And they are being careful to keep their efforts consistent with the themes being emphasized by Mitt Romney’s campaign.

The result is a striking degree of symmetry. To see many of the anti-Obama ads that have run on television recently, it would be easy to conclude that they were made in the same studios, by the same producers working for the same campaign.

From the numbers they throw out (23 million people looking for work, $5 trillion in new debt), to the illustrations they use (a squiggly red line, plunging steeply), they are often indistinguishable except for the disclaimer saying who approved this message.

“Dishonest on taxes because he failed on jobs,” says a recent ad from Crossroads GPS, the group run with the help of Karl Rove and other top Republican strategists.

“Barack Obama wasted $800 billion on a failed stimulus,” says another produced by Restore Our Future, a pro-Romney super PAC.

It is no accident that the theme driving these ads — Mr. Obama is a failed leader — is also a major component of the Romney campaign’s message. An ad released last week by the campaign declares that the president is “failing American families.”

This sharpened message is providing the Romney campaign crucial cover as it works to raise more money to pay for advertising of its own and recover from its recent stumbles. And by coordinating their advertising purchases, the outside groups are maintaining a continuous presence on the air for the next few weeks while plugging many of the holes in Mr. Romney’s ad schedule. Over the last two weeks, these groups have allowed Mr. Romney to keep pace on the air, roughly matching what Mr. Obama and his supporters have spent. This week they will ensure Mr. Romney has the advantage by several million dollars in competitive states.