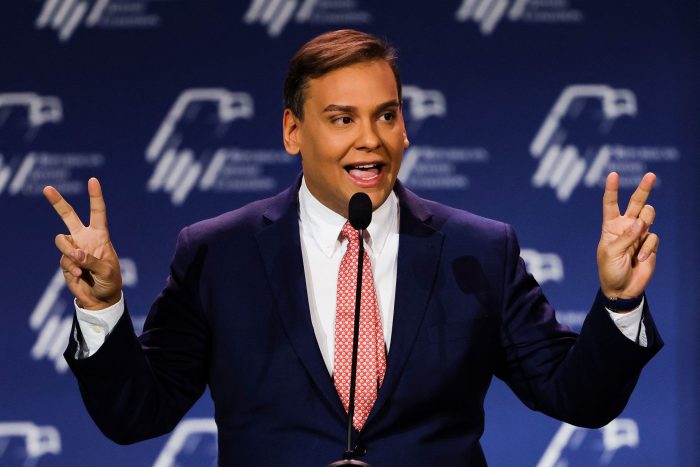 Santos and Zimmerman are both openly gay, which is a first in US history. Thursday, at that sad Log Cabin Republican event in Mar-a-Lago, Santos boasted, “We’ve shattered the glass ceiling, and we’ve shown the radical Left that there are gay conservatives who actually stand for freedom.” This resulted in an adorable back-and-forth with Democratic Rep. Ted Lieu, who reminded Santos that just last week, “169 of your Republican colleagues voted to deny you the freedom to marry someone of the same sex or of a different race. Have fun caucusing with them!”

Oh hi @Santos4Congress, wanted to let you know 169 of your Republican colleagues voted to deny you the freedom to marry someone of the same sex or of a different race. Have fun caucusing with them! https://t.co/NrkIHp16DV

Santos snapped back, “Sorry to tell you that not all gays think alike. I challenge your antiquated thought process and reject your disdain for my beliefs. You should be ashamed. But I know you won’t be.” Is Santos suggesting that not all gay Americans support their own basic civil rights? An overwhelming majority of all Americans support marriage equality, and only a minority of annoying bigots oppose it. Lieu is not the one who should feel ashamed.

Responding like an offended gentleman from a Jane Austen novel, Santos wrote, “Dr. Ted Lieu, my Husband made sure I reminded you that our right to marry was never challenged. I do however look forward to working with you on lowering inflation and crime across our beloved country with the same enthusiasm.”

Oh yes, the old trope that Democrats use “identity politics” as a frivolous diversion from “real” issues that impact Americans, such as inflation, the border crisis, and CVS’s supply of butt plugs. Santos presumably doesn’t keep up on current events, because conservative Supreme Court Justice Clarence Thomas openly targeted same-sex marriage rights when dancing on Roe v. Wade’s grave this summer. When joe Biden signed the Respect for Marriage Act, there was a full-blown Fox News freak out.

Santos was the one talking about gay conservatives standing for freedom. Lieu just pointed out that Democrats are the ones who’ve consistently ensured that gay Americans can live freely.

If Lieu’s dressing down on Twitter wasn’t bad enough, Santos was possibly exposed as an even greater fraud in today’s New York Times. The son of Brazilian immigrants, Santos’s campaign biography claimed he “catapulted himself from a New York City public college to become a ‘seasoned Wall Street financier and investor’ with a family-owned real estate portfolio of 13 properties and an animal rescue charity that saved more than 2,500 dogs and cats.”

However, the Times looked into Santos’s background — perhaps a couple months too late — and discovered:

Citigroup and Goldman Sachs, the marquee Wall Street firms on Mr. Santos’s campaign biography, told The Times they had no record of his ever working there. Officials at Baruch College, which Mr. Santos has said he graduated from in 2010, could find no record of anyone matching his name and date of birth graduating that year.

There was also little evidence that his animal rescue group, Friends of Pets United, was, as Mr. Santos claimed, a tax-exempt organization: The Internal Revenue Service could locate no record of a registered charity with that name.

DID HE LIE ABOUT THE PUPPIES AND KITTENS?

Santos’s self-described family firm, the Devolder Organization, has no public website or LinkedIn page. That’s fine for one of those exclusive New York speakeasy bars, but it’s questionable for an actual consulting company. The Times could also find no record of Santos’s expansive real estate holdings.

The Times reports that Santos has a criminal record in Brazil, where he confessed to stealing the checkbook from a man his mother was caring for as a nurse. He was 19 and this was the distant past of 2008. He also claimed he went to New York University, but there are no attendance records matching his name and birth date.

Perhaps most repulsively, Santos claimed his very real company “lost four employees” at the Pulse nightclub shooting. There is no evidence that this is true. He’s like the queer Jay Gatsby of Long Island. Zimmerman’s campaign probably should’ve spent a couple dollars on opposition research.

Democrats should play hardball on Santos, though, because they could likely flip back his seat in a special election. But today’s Republican Party is like Chinatown, Jake. No one ever accepts accountability for their lies.